Tension between Turkey and the United States is back in the spotlight and putting pressure on the Turkish Lira. In response to news that Turkey is moving forward with a military offensive in Northern Syria, US President Trump began withdrawing American troops from the area early Monday.

The latest development came subsequent to a phone call between Trump and Turkish President Erdogan, which resulted in a collapse of the ongoing effort to broker peace between US allies in Turkey and Northern Syria. 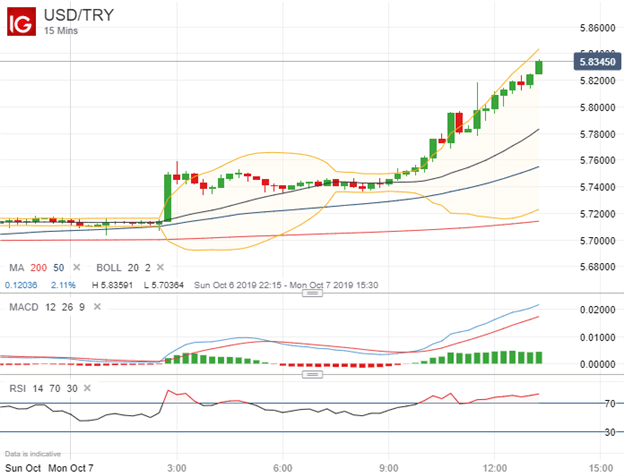 As Monday trade was underway, President Trump tweeted out from his personal twitter account that “I will totally destroy and obliterate the economy of turkey” if POTUS finds Turkey or Erdogan doing “anything considered to be off limits.”

Trump also stated in a tweet “the endless and ridiculous wars are ending! We will be focused on the big picture, knowing we can always go back & blast!” 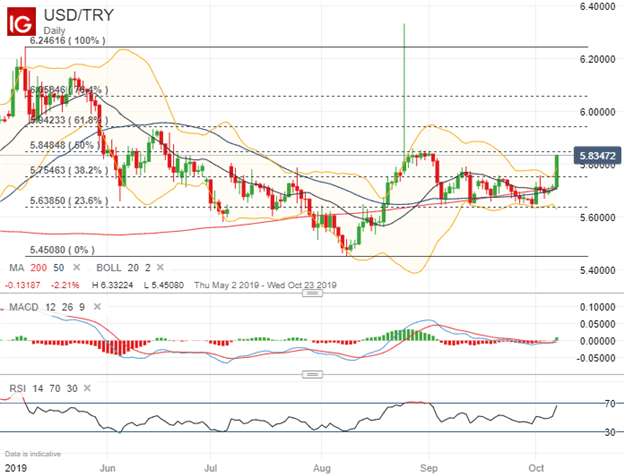 Aside from the August 25 rally in spot USDTRY, which printed an incredibly long bearish wick, the emerging market currency pair is now on pace for biggest intraday rally since March 28. A close above the 5.85 price level – underpinned by the currency pair’s mid-point retracement of its year-to-date trading range – could confirm the recent rally in the US Dollar against the Turkish Lira and lead to further upside in spot USDTRY. 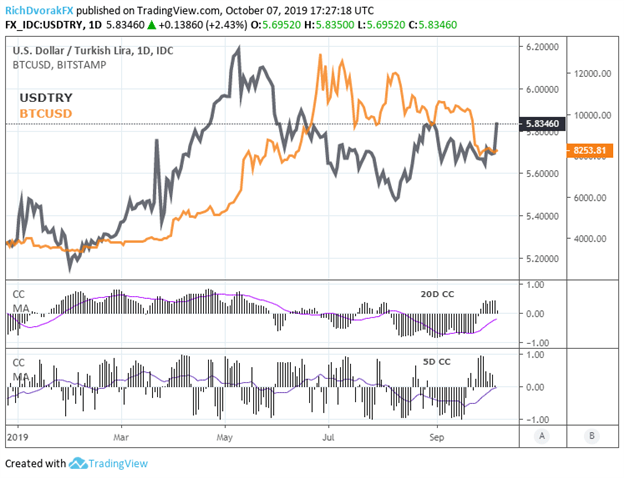 Remarks from US Senator Lindsey Graham noted that the US will seek sanctions against Turkey if Erdogan moves forward with invading Syria. Correspondingly, the thesis holds that the generally positive correlation between USDTRY & BTCUSD is driven by capital flows out of emerging market currencies (like the Turkish Lira) into less regulated crypto-currencies such as bitcoin. For more information, check out our Emerging Markets Crisis Monitor – Seven Factors Traders Should Watch.