The Nasdaq 100 could fall under pressure in the coming days as trade negotiations in Washington highlighted the deep-seated disagreements from either side. Specifically, the Chinese Commerce Ministry said changes to their intellectual property laws are not on the table, and never will be. In the past, President Trump has repeatedly expressed his desire for a full deal, while dismissing the possibility of a partial agreement. Given China’s unwillingness to negotiate on one of central issues between the two nations, a trade deal seems highly unlikely. 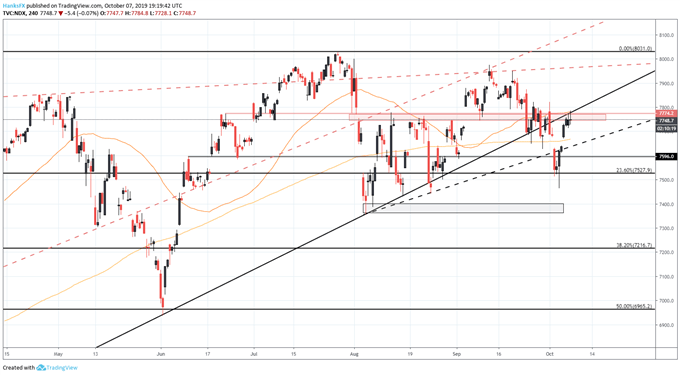 Consequently, the Nasdaq 100 shed earlier gains and remains locked within its August trading range – capped by the 7,775 level. With trade talks unlikely to bare fruit, sentiment could sour as the market grasps for a fundamental boost. If recent months are any indication, the catalyst will likely be offered by dovish monetary policy from the Federal Reserve, something Fed official Neel Kashkari exuded in commentary on Monday morning. That said, Mr. Kashkari is a notoriously dovish member of the central bank, so the immediate market reaction was tempered. Nevertheless, the openness to further easing should look to provide a modicum of hope for traders looking to extend the 10-year bull run.

In pursuit of a bullish continuation, however, traders have had to cope with a concerning buildup of bearish evidence. Ranging from trade war breakdowns, geopolitical flareups, yield curve inversions and dismal manufacturing data, the market was dealt another bearish hand on Monday with the Russell 2000 forming a death cross. 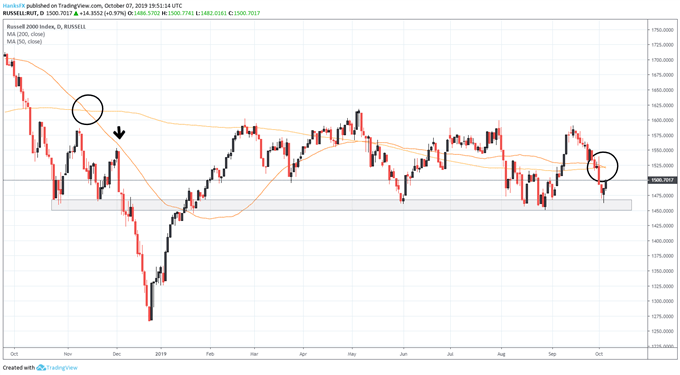 Therefore, a further breakdown in the Russell 2000 could spillover into the Nasdaq 100 and other major equity indices – potentially pressuring the tech-heavy Index to recent support around 7528. The culmination of headwinds and technical deteriorations has worked to seriously erode the stock market’s standing heading into the fourth quarter.

As I cover in my fourth quarter forecast, the equity market’s landscape is eerily similar to a year ago, when the market underwent a brief – albeit precipitous – correction. With that in mind, this latest impasse in trade negotiations could result in a period of bearishness until the odds of another rate cut increase, as the carousel of themes impacting the stock market begins yet another cycle.