The Australian Dollar slipped a little against the Japanese Yen Sunday on news that China’s foreign reserves fell more than expected in September.

China has the world’s largest reserves, but they fell US$14.8 billion last month, to $3.092 trillion according to official figures. The markets had been looking for a fall of less than half that. China’s foreign exchange regulator said the slide was due to fluctuations in asset prices and forex rates.

The data inspired a modest ‘risk off’ move, obviously blunted by thin weekend markets. The Australian Dollar remains the foreign exchange market’s favorite liquid China-economy bet, it lost out modestly to the haven Japanese Yen when the numbers came out. 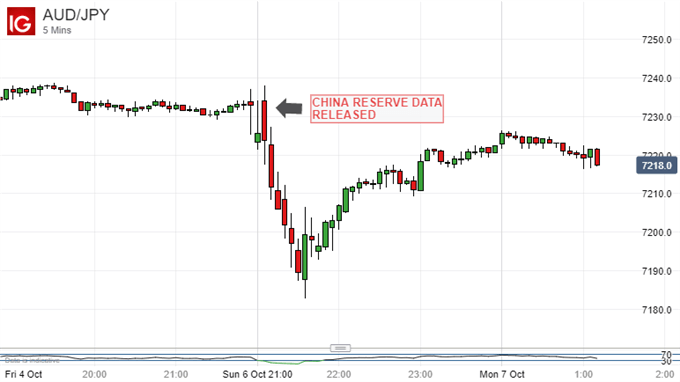 China has in the past spent hundreds of billions defending the Yuan, but reserves have bounced back from their 2018 low thanks to both capital controls and increased foreign investment in Chinese assets. China has also considerably increased its reserves of gold this year.

Trade negotiations between China and Beiing are expected to continue this week, however analysts believe that a truce in the trade war is probably the best that can be hoped for. A durable settlement or overarching trade deal seems to remain a distant prospect given the differences between the two sides.

There are clear signs that trade tensions are weighing on the Chinese economy now. Output from its large manufacturing sector has contracted for eight of the last twelve months, Smaller firms are doing better, but they may be more focused on domestic customers and less on foreign trade. Gross Domestic Product expanded an annualized 6.2% in the second quarter of this year, raising fears that 2019 growth overall will come in at the lower end of Beijing’s 6-6.5% target. The second quarter’s growth rate was the weakest since early 1992.