US Dollar Uptrend on SGD Reinforced by Singapore PMI Contraction

The US Dollar may rise against the Singapore Dollar down the road after PMI data underpinned rising bets of easing from the Monetary Authority of Singapore. For these data sets, a reading below 50 indicates contraction and vice versa. IHS Markit Singapore PMI - whole economy - clocked in at 48.3 in September which was softer than the 48.7 outcome in August.

Not only did this mean the second consecutive contraction in economic activity, but it was also the lowest outcome since August 2012 (over 7 years ago). On the first chart below, the decline in activity has been coinciding with weakness in global manufacturing PMI. We also recently saw fading output from a similar measurement in the United States (10-year low) as China’s economy has slowed to its weakest in 30 years.

These surveys have been highlighting the US-China trade war as a key factor in fading output as trade activity slows. Singapore’s economy is heavily reliant on external activity, and this has also translated into reductions of growth forecasts for this year and beyond. Now according surveys from Bloomberg, local GDP is expected to clock in at 0.7 percent y/y this year. This is down from a 2.2% forecast from June.

This has translated into rising expectations that the Monetary Authority of Singapore (MAS) could ease policy at its semi-annual meeting later this month. Unlike most central banks, this would mean a shift towards targeting depreciation for the SGD. Meanwhile, the US Dollar could benefit if rising trade war fears induce demand for safe havens. This is as another front opens up across the Atlantic Ocean. 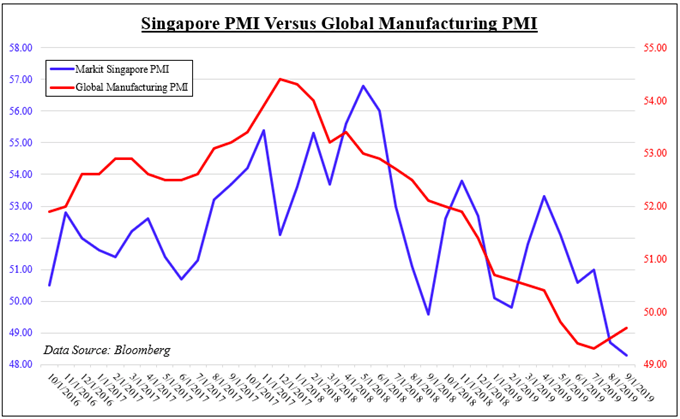 Taking a look at USD/SGD daily chart, the pair has been in a near-term uptrend since finding a bottom around 1.3725 in September. Zooming further out, we can see that its rise has been reinforced by ascending support from July – red line below. After taking out the psychological barrier between 1.3808 – 1.3836, this has opened the door to testing August highs. A close under rising support increases the odds of a bearish reversal. 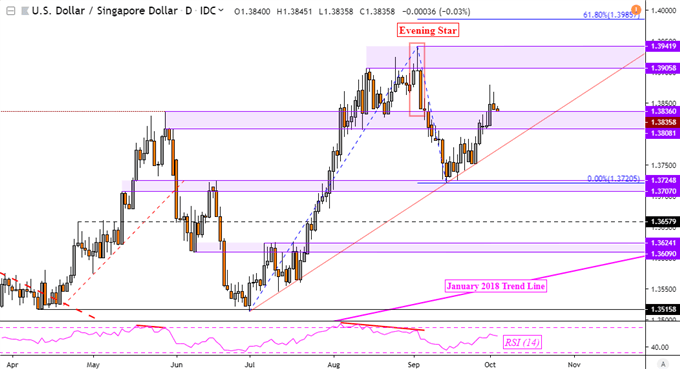