The DAX 30 has fallen under considerable pressure this week, suffering its worst intraday performance on Wednesday since August 2 when it fell -3.11%. With a coincidental alignment of technicals and fundamentals, bearish headwinds have worked to erase much of the Index’s September rally. Now, the potential for another trade war escalation may work to push the Index lower still.

Following the announcement that the United States will impose tariffs on the EU beginning on October 18 - in the ongoing battle between Airbus and Boeing - the threat of tit-for-tat retaliation has emerged. As it stands, the US will impose a 10% tariff on European airplanes and a 25% tariff on European agricultural goods – an action deemed acceptable by the WTO. Already, the European Union has drafted up a document for potential retaliatory targets, mainly large aircraft and agricultural products.

The EU has not, however, received the WTO’s permission to impose these tariffs – and may not until the first half of 2020. Should the European union seek to exact revenge without the WTO’s blessing, it would likely open the door for an American countermeasure which could spark a downward spiral in trade ties for the two allies – something neither the Dow Jones nor the DAX 30 can afford.

Further still, such a decision would work to undermine the WTO’s role in global trade, setting a precedent for other nations to discard the governing body’s rules and guidelines. While a breakdown in trade ties between the two trading partners would undoubtedly dent global growth, undercutting the intergovernmental organization may have more-dire and longer-lasting implications. 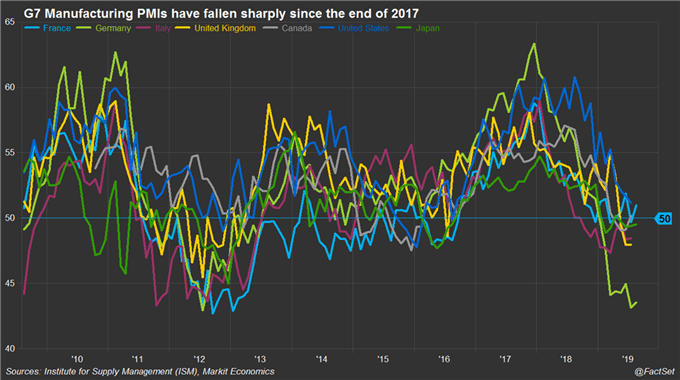 Nevertheless, the immediate threat lies with the Dow Jones and DAX 30. Given their respective underlying economies, the DAX 30 may find itself particularly troubled. Recent data out of Germany has highlighted its flagging economy and another headwind brought about from an expanded US-EU trade war could look to deal the final blow. In an attempt to resuscitate the German and European economy, the European Central Bank has already announced further easing for the bloc and is now urging fiscal measures to stimulate growth.

View our Economic Calendar for the dates and times of upcoming data which could spark volatility.

That said, with a material decline in trade relations and the potential for retaliation, the efficacy of the ECB’s policy may be questioned. Compounding the uncertainty, the Trump administration may still enact auto tariffs on the European Union, which could hamstring the German economy. Therefore, it seems the DAX may be destined for further losses as the market looks to asses the different factors on either side. 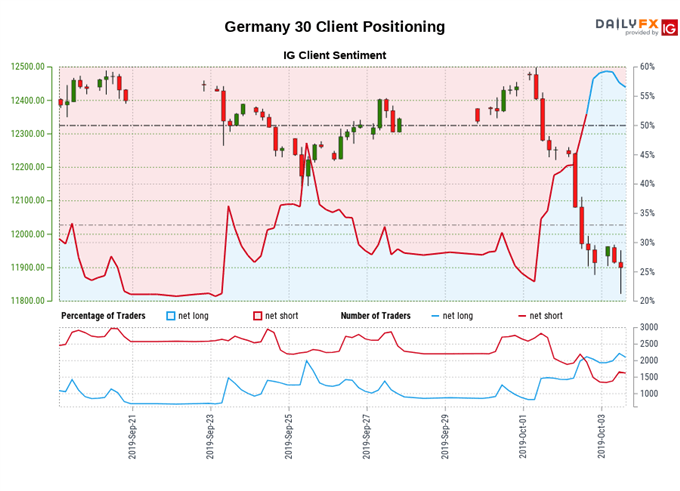 We typically take a contrarian view to crowd sentiment, and the fact traders are net-long suggeststhe DAX 30 may continue to fall. Traders are further net-long than yesterday and last week, and the combination of current sentiment and recent changes gives us a stronger bearish contrarian trading bias for the DAX. For a detailed look at IG Client Sentiment data on the German Index and how we arrive at this conclusion, check out the video recording above or follow @PeterHanksFX on Twitter for deeper insight.