The Pound has been underpinned from the better than expected Manufacturing PMI data (48.3 vs. Exp. 47.0), which had been predominantly supported by businesses beginning to stockpile ahead of the October 31st deadline, as was the case in the run up to the Original deadline in March. However, the Manufacturing PMI remains in contractionary territory, while the level of stockpiling is notably subdued relative to earlier in the year. In turn, leaving manufacturers more vulnerable in the event of a no-deal Brexit, although with that said, our base case remains an extension to Article 50. 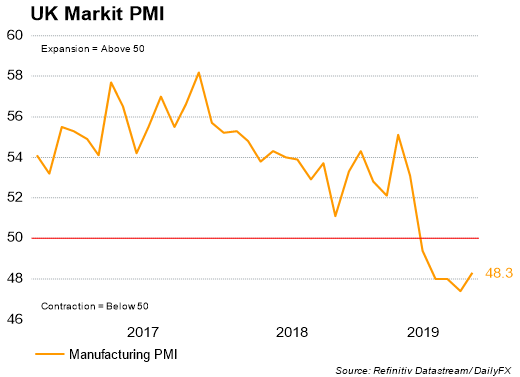 Headline risk surrounding Brexit remains elevated and will continue to largely dictate short-term price action in the Pound. Overnight, reports suggested that PM Johnson’s Brexit plan would entail the creation of an all-Ireland economic zone which would allow agricultural and food products to move freely without checks at the border. However, while Boris Johnson remains adamant that they will make a very good offer to the EU, the Irish Foreign Minister has already stated that the proposals pertaining to custom checks a couple of miles from the border is a non-starter, while EU officials have also remained sceptical that this could result in a breakthrough.

On the technical front, GBP/USD has been consolidating with the pair finding support from 1.2260-80, while topside resistance is situated at yesterday’s high of 1.2345