Sterling volatility is expected to rise further this week as talk of a Remain plot to force PM Johnson to ask for a Brexit extension start to swirl. The PM, who said that he would not ask the EU for an extension and that the UK would leave the EU on October 31, with or without deal, would then be unable to deliver on his promise. The Remain plot is to bring forward the date when the PM must ask the EU for an extension from October 19 to this Saturday, October 5, according to an article in the Daily Telegraph, after cross-party talks to hold a vote of no-confidence in Boris Johnson failed. The PM will be even busier this week with the week-long Conservative Party Conference in Manchester starting today.

Discussions between the EU and UK continue on a daily basis and some unofficial tweets are positing that a time-limited backstop may be agreed between the two-sides, although the Democratic Unionist Party (DUP) would need to be convinced before further talks.

Sterling (GBP) continues to waiver in the face of rumor and counter-rumor and remains weak against a range of currencies. The British Pound fell by over two cents against the US dollar last week, hitting a two-week low of 1.2270. The pair may also be finishing forming a ‘head and shoulders’ pattern, suggesting lower prices in the future. Looking at the downside, initial support is formed off the 50-day moving average at 1.2258 just ahead of recent lows at 1.2230 and 1.2209. A break and close below here would bring 1.2100 area back into focus. To the upside, 1.2382 remains the first target ahead of the 20-day moving average at 1.2400. 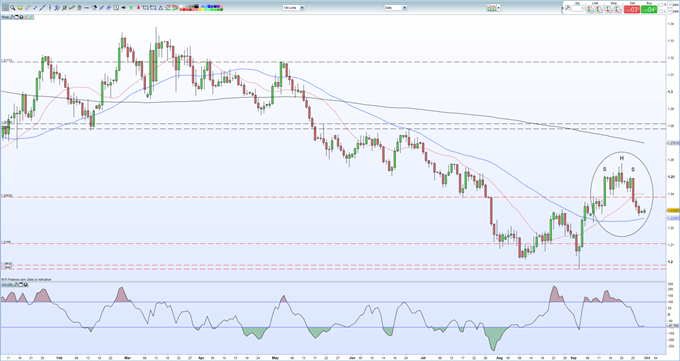