Asian stocks put in an understandably mixed performance on Monday with stronger-than expected Chinese economic data pulling them up and a new twist in US-China trade relations perhaps weighing them down.

The September snapshot of China’s smaller, often-private manufacturers surprised sharply to the upside despite the lack of any clear trade settlement between the world’s two largest economies. The Purchasing Managers Index from media group Caixin came in 51.4. That was a 19-month high and well above the key 50 level which separates expansion in activity from contraction. Puzzlingly, the official survey of larger concerns for the same month showed that activity there continued to fall, as it has for much of the past twelve months. The discrepancy may be accounted for by the fact that bigger firms are more exposed to global trade flows than their smaller cousins which respond more to domestic demand.

The good news from Caixin may have counteracted gloomier influences from last Friday’s reports that the US was considering curbs on investments into China. This story seemed markedly at odds with the recent more emollient tone between the two global giants and, at the very least, underlines that relations remain fragile.

Mainland Chinese stocks were lower, with the Shanghai Composite was down 0.4%. However the Hang Seng was up by 0.5%, helped by a strong trading start for brewer Annheuser Busch InBev’s Asia Pacific unit, spun off last week in the world’s second largest Initial Public Offering of the year. The Nikkei 225 was down 0.6% with Softbank stocks under pressure.

The US Dollar was initially supported but crept back a little through the session. However the New Zealand Dollar was whacked by another dismal business confidence survey from the Australia and New Zealand bank which found sentiment at lows not seen since 2008.

NZD/USD flirts again with lows from 2015 and remains well within the overall downtrend channel which has held sway since August 7. 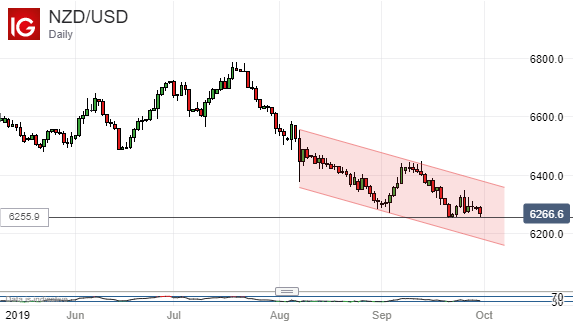 That downtrend is itself only a continuation of the fall from this year’s July peaks and, with no let up seen in the downward pressure on NZ interest rates, it seems likely to have further to run.