US Dollar May Rise vs PHP, MYR. Malaysia Stays in Key Bond Index

The Philippine Peso gained ground towards the end of the week after Thursday’s local monetary policy announcement. Initially, USD/PHP paid little attention after the Philippine Central Bank (BSP) reduced benchmark lending rates by 25 basis points to 4.00 percent. That was most likely the case due to it being largely priced in by financial markets, catching few investors off guard.

When asked about their views on further moves, the central bank vowed to stay data-dependent. The outlook for inflation this year was revised slightly lowerto 2.5 percent from 2.6 at their previous meeting. This is approaching the lower boundary of their 2 – 4 percent price target. Still, the focus for financial markets on Thursday were developments from the United States as the US Dollar rallied despite liquidity concerns.

What likely fueled the Philippine Peso rally was commentary from BSP Governor Benjamin Diokno. A day after their monetary policy announcement, he mentioned that the central bank is not committed to whether or not to cut rates again for this year. Rather, he emphasized closely monitoring local inflation and GDP data. This dependence is what likely cooled near-term easing bets, sending USD/PHP lower.

Meanwhile, the MYR briefly gained after FTSE Group announced that Malaysia would remain on their fixed income watchlist. This was a cautious sigh of relief for local markets given that back in April, FTSE Russell reported that it could drop Malaysian debt from their World Government Bond Index due to accessibility problems. It briefly sent local bond yields higher on fading demand and interest for Malaysian paper.

Fast forward to September and it is looking like Malaysia could be in the clear for now. While FTSE Russell refrained from dropping the country from its Global Bond Index, the country is still on their watchlist for a potential downgrade. That may be why the Malaysian Ringgit trimmed its gains. USD/MYR is still vulnerable to turning lower as signaled by a bearish candlestick pattern.

Despite these developments, Malaysian 10-year government bond yields are around 14.10 percent lower from the April peak – see chart below. The trajectory has been downward during this period largely due to the impact of the US-China trade war on global monetary policy. In response to economic threats, central banks have been cutting rates. Until an agreement is reached, this trend may continue undermining MYR and PHP. 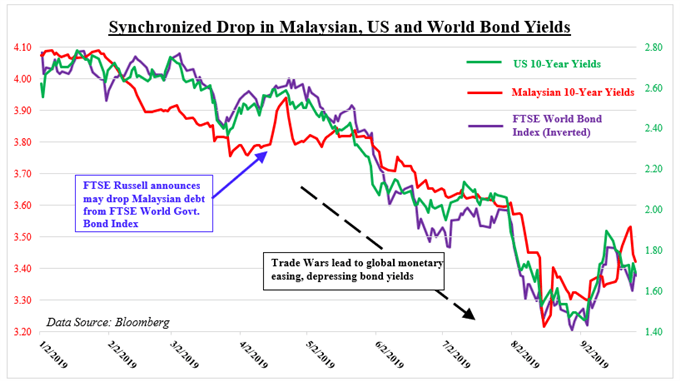