Since gold’s recent peak on September 4, the precious metal’s price has declined nearly -3% as risk aversion receded and inflationary concerns remained relatively consistent. Still, the total known exchange traded fund holdings of gold have continued to climb – suggesting some investors are still seeking exposure for the yellow metal. Consequently, gold prices could look to enjoy a modest boost from the ETF market as traders look to hedge their portfolios with the S&P 500 and Dow Jones near all-time highs. Alternatively, some traders could be clinging to bullish hopes and attempting to buy the pullback before a continuation higher. 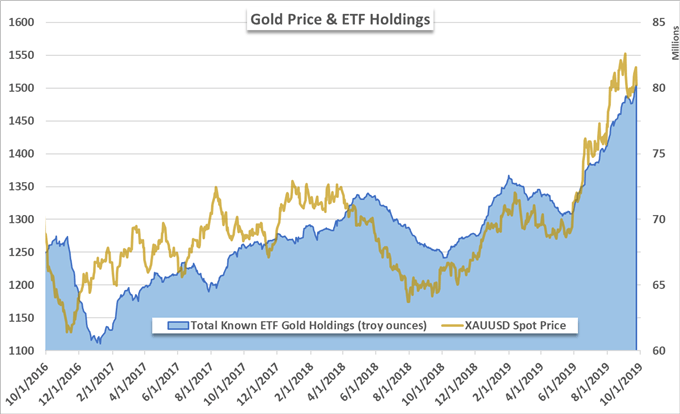 Either way, the total holdings of gold in the ETF market have increased materially. Since September 4, traders now hold roughly 800,000 more troy ounces of gold - or about 1% of total in the ETF market – than they did before. Meanwhile, price has simultaneously declined by almost -3%.

Interestingly, the relationship in price and ownership has not materialized in silver where total holdings have fallen alongside price. Suffering a decline of more than -8% since September 4, the total ETF holdings of XAGUSD slipped a similar -8% in the same span. The divergence in price and holdings between the two precious metals has seen the gold-to-silver ratio mount a rebound in September after previously cratering in July and August. Moving forward, the themes unfolding in both gold and silver could allow for trading opportunities when trading the gold to silver ratio. 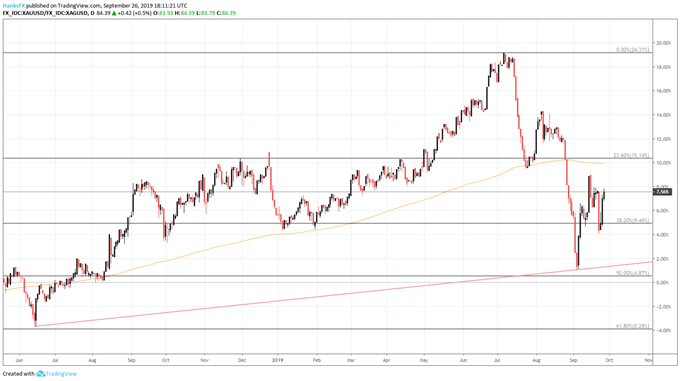 With that in mind, check out our guide to learn the tips and tricks ofTrading the Gold - Silver Ratio. Apart from technical levels, the two metals will look to the ongoing US political uncertainty for cues and immediate price catalysts. If the impeachment process gains momentum, investors could flock to both gold and silver for relative safety. In the meantime, follow @PeterHanksFX on Twitter.