US Dollar is King, GBP/USD Suffers, USD/JPY May Reverse - US Market Open

USD: The US Dollar remains king as its major counterparts weaken, most notably GBP. The greenback appears to have shrugged off the initital fears pertaining to an impeachment of President Trump. That said, it would take a 2/3 majority in the Senate to be able to remove Trump from office. As such, given that the Republicans hold a majoirty with the Senate, this appears unlikely. However, the uncertainty looks to have plagued equity markets with European equities trading with modest losses. In turn, USD/JPY may begin to attract sellers from 107.80-108.00.

GBP: The political limbo keeps the pressure on the Pound, which is losing out to both the Euro and the Dollar. While the odds of a no-deal Brexit at the October 31st deadline appear to have diminished, expectations are building that a snap election will be the only way to potential break the currency deadlock. However, that in itself adds further uncertainty over UK politics and thus the Pound remains on the backfoot.

NZD: An intial bid in the New Zealand Dollar following a less dovish monetary policy statement. In turn, this saw the odds of a rate cut at the November meeting ease to 66% from 80%. AUD/NZD tested the 107.00 level on the downside before bouncing back, however, with key risk events in the form of the RBA rate decision and Aussie retail sales, the cross may continue its reversal, prompting a move towards 1.0630. 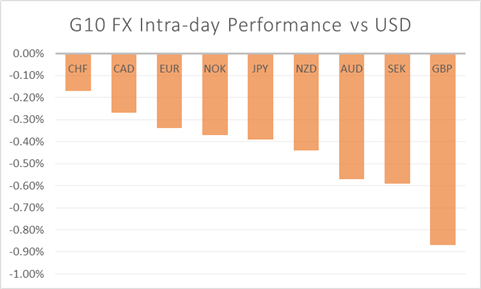