The Rupiah held its ground versus the US Dollar after the Bank of Indonesia delivered a third reduction to its benchmark lending rate in a row on Thursday. Granted, the cut to the 7-day reverse repurchasing rate to 5.25 percent from 5.50 was expected. What was also delivered were easing in macroprudential policies to stimulate lending. These included revisions to loan-to-value ratios for property and vehicles.

These actions come as Indonesian GDP continues to slow from its 2018 second quarter peak at 5.27 percent year-over-year. Twelve months later, growth weakened to 5.05 percent. The central bank continues to see high uncertainty in global markets, pressured by US-China trade tensions. Over the past 24 hours, this was underpinned by the OECD which envisioned world expansion slowing to its weakest since 2008.

It is entirely reasonable to expect further easing from the Bank of Indonesia, especially if trade wars heat up again, but why did USD/IDR end little changed 24 hours later? Something to keep in mind is that the central bank is actively intervening in foreign exchange markets to guard the Indonesian Rupiah. On September 16, it announced that it stepped in the bond market in order to maintain stability in their currency.

There was no short supply of familiar commentary about the Rupiah from the central bank. For the time being, it sees the IDR as stable and in line with market mechanisms. This could come into test heading into the end of the week and beginning of next as US and Chinese officials discuss trade in Washington later today. Should talks fall apart, a demand for liquidity could drive the haven-linked US Dollar higher against IDR.

Eyeing the USD/IDR weekly chart, the currency pair once again finds itself unable to breach a horizontal support channel between 13848 – 13923. In turn, this could pave the way for a retest of the descending trend line from May. If that is taken out, the next area of resistance seems to be around 14340. More broadly speaking, the Rupiah has been consolidating since the February low with upper resistance at 14525. 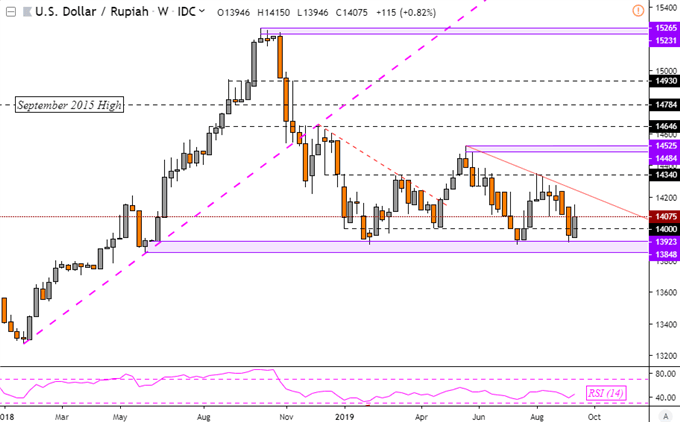 It will be interesting to watch the MSCI Indonesia ETF as it responds to updates in US-China trade talks. On the weekly chart below, the index recently failed to launch a push above descending channel resistance from the end of 2017. This could lead to another test of near-term rising support from May which if taken out, exposes the longer-term rising channel from 2015. 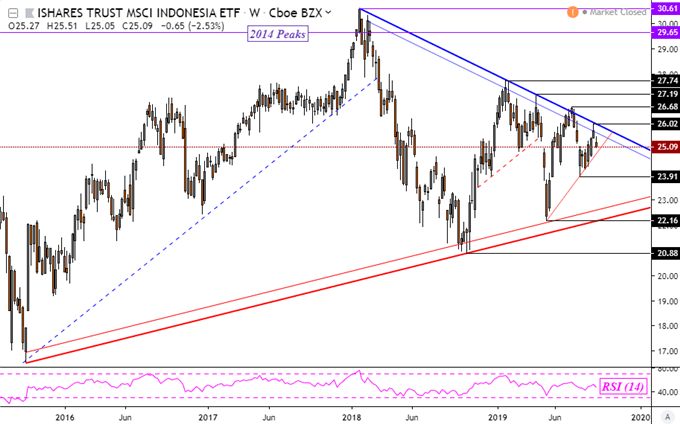