While the quarter point reduction in the Fed Funds Target Rate was welcomed by equity investors around the world, they could hardly help but notice that three rate-setters were opposed to the move, and the panel was clearly split on the likelihood of further moves this year.

Just hours after the Fed the Bank of Japan opted to leave its hugely accommodative monetary settings alone. However, it hinted that some more stimulus could be needed as soon as October if global conditions deteriorate and push the BoJ’s long-elusive inflation target even further out of reach.

The Nikkei 225 was up 0.5% in the middle of its afternoon session, with South Korea’s Kospi up 0.2%. Shanghai stocks were flat to slightly lower, while Hong Kong’s Hang Seng was down more than 1% weighed down by falls for insurer AIA.

The ASX 200 added 0.6%. with the ‘big four’ banks all higher. A report in the Australian press suggested that Chinese buyers are taking renewed interest in the domestic property market, and that gave sentiment a lift. The ASX tech sector continues to charge higher too.

Australia’s official employment data proved a mixed back. Headline job creation was massively ahead of forecasts but full-time positions contracted sharply and the overall unemployment rate crept up. The Australian Dollar slipped after the data and stayed down through the session.

The Fed’s apparent caution kept the US Dollar broadly supported in Asia. The New Zealand Dollar briefly gained on official Gross Domestic Product data which bear expectations. However, it failed to hold those gains against a broadly rising greenback, and enduring expectations that New Zealand interest rates could yet go lower. 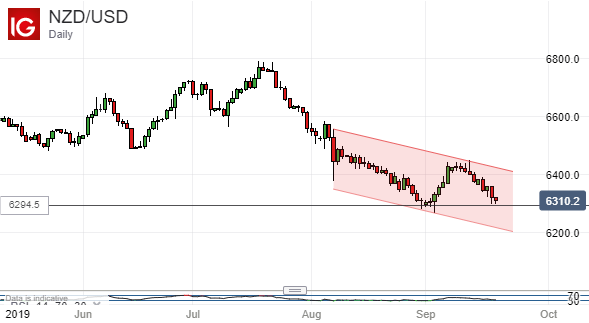 NZD/USD has fallen back toward the year’s lows, which were struck earlier this month.

It remains very much within its currently dominant downtrend channel which itself has only been an acceleration of the falls seen since July.