USD/NOK may fall if the Norges Bank raises interest rates for a third time this year and/or hints that it still intends to pursue its tightening cycle. It has been dubbed the “last hawk” in the world of central banks as its peers cut rates in the face of slower global growth. Politically-induced supply disruption fears in the Middle East have helped buoy the oil-linked Krone, though their potency may ware off in the face of eroding demand.

Analysts are estimating for the Norges Bank to hold the benchmark interest rate at 1.25 percent. However, it is possible monetary authorities may take advantage of the high crude oil prices and temporary thawing in trade tensions to squeeze in a third hike this year. Looking at implied policy rates between the August rate decision and now as compared to July to August shows there’s been a hawkish shift in market expectations.

Supply disruption fears as a result of political tensions in the Middle East – be it from Iran’s nuclear program or their alleged involvement in the Saudi Aramco drone strike – have helped buoy crude oil prices. Norway’s petroleum-based economy and the Norwegian Krone have benefited from this as eroding fundamentals chip away at world demand for crude oil. 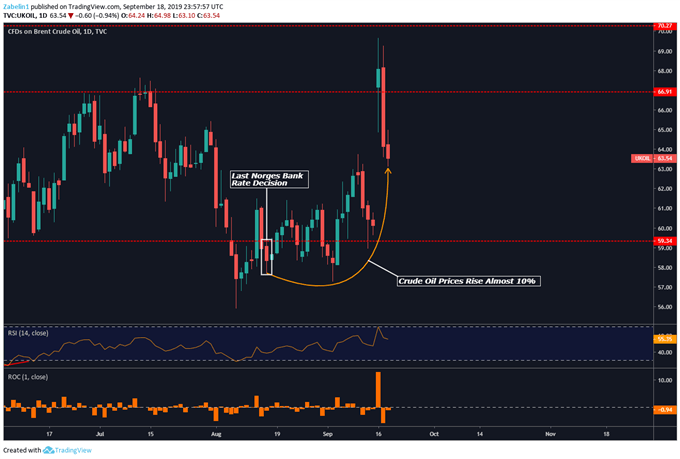 USD/NOK could once again break below the multi-month rising support channel and cause the pair to deviate from their dominant uptrend (red parallel channel). The pair has already broken through a two-month ascending support zone (yellow parallel lines) and has led to the it puncturing a familiar support zone. Traders may wait to commit capital until after the Norges Bank rate decision and outlook.