The Australian Dollar slipped on Thursday morning despite a blockbuster beat for overall August job creation in the official data.

Overall employment increased by a chunky 34,700 over the month, well ahead of the 15,000 or so the market was looking for. However, the detail of the report was less cheerful. Most of that strength was accounted for by part-time positions. Full-time jobs were actually down by a worrying 15,500, having risen by 34,500 in the previous month. The unemployment rate also ticked up, to 5.3% from 5.2% even as the participation rate also gained, to 66.2% from 66.1%

Altogether this was a rather difficult report to read, but Australian Dollar bulls have a marked preference for full-time job creation, suspecting, rightly or wrongly, that it is more likely to stay the Reserve Bank of Australia’s rate-cutting hand than more part-time employees. 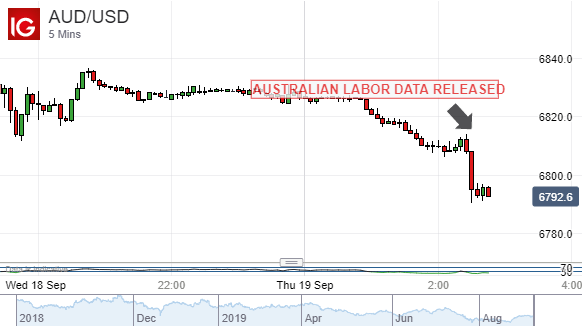 Still, the labor market has been a bright spot in the Australian economy for some years and this data does not unambiguously suggest that it is darkening to any significant degree. What it will do however is increase interest markedly in next month’s edition.

The Australian Dollar spent much of September rising against its US cousin as the atmosphere around such growth-correlated currencies brightened considerably. They were supported by a clearly better tone in US-China trade relations. That seems to endure with both sides still due to meet in Washington next month.

Expectations that the world’s central banks were open to providing additional stimulus also supported pro-cyclical units like the Aussie. Those expectations have been fulfilled too, first by the European Central Bank and, just this week, by the US Federal Reserve.

However, the Australian Dollar has wilted somewhat this week. The Reserve Bank of Australia’s last set of monetary policy minutes suggested that the central bank was prepared to cut record-low interest rates yet again. That would mean that the Aussie’s position as a lower yielder than the US Dollar would be maintained even as US rates go lower. 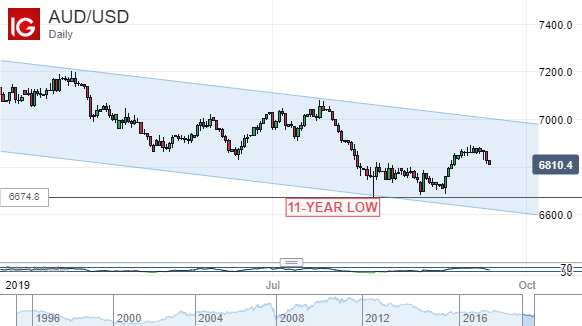