USD: The US Dollar has recouped much of yesterday’s losses as eyes turn towards the FOMC rate decision. The central bank is expected to cut interest rates to 1.75-2.00%, however, with this priced in, focus will shift towards dot plot and the accompanying commentary. Alongside this, much of the attention may well be placed on the potential response to the recent surge in repo rates, which yesterday prompted the central bank to carry out an open market operation for the first time since the GFC.

GBP: Sterling pulled away from the 1.2500 handle following the latest inflation data, which dropped to 1.7% (Exp. 1.9%) with the ONS highlighting that the drop had been mainly driven by a decrease in computer game prices, plus clothing prices rising by less than last year after the end of the summer sales. However, while this may be the lowest level since December 2016, the figure is still above the 1.6% that the BoE has forecasted. That said, the central bank is likely to pay greater attention to UK wages, which are hovering around a post crisis high. Nonetheless, the BoE will stand pat as Brexit uncertainty continues to tie the hands of the central bank.

CAD: Muted reaction to the CPI data, which despite the drop in the headline, the BoC’s preferred measure of inflation is bang on 2%. As such, the is likely to endorse the BoC’s wait-and-see stance, therefore external factors, most notably oil prices are likely to drive the Canadian Dollar. 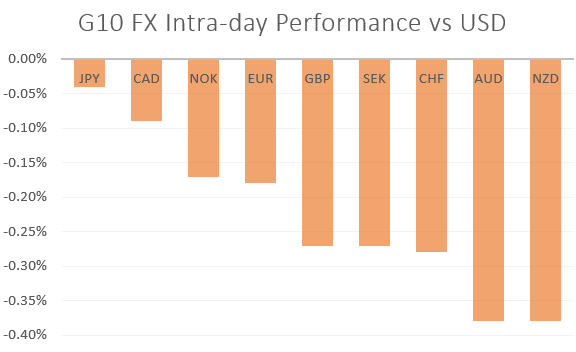