Sterling (GBP) Slips Lower After Inflation Data, BoE Up Next

Bank of England governor Mark Carney will have noted with interest the latest fall in UK inflation ahead of tomorrow’s BoE MPC decision, with UK prices rising at their slowest rate since late 2016. The ONS report highlighted that the fall ‘was mainly driven by a decrease in computer game prices, plus clothing prices rising by less than last year after the end of the summer sales.’ The latest data will be welcome news for UK consumers, with real wages now rising between 2% and 2.2% in August.

Thursday’s BoE monetary policy decision now comes into view with the central bank expected to leave all monetary policy settings unchanged. Governor Mark Carney will likely mention the latest downturn in inflation, and its expected short-term path, but will again reiterate that the BoE will remain on hold until Brexit is resolved, one way or another.

GBPUSD has dipped post-release to 1.2455 but the recent uptrend, defined by lower highs from the September 3 low, remains in place. Support remains around 1.2382, made up from a cluster of recent highs and lows, while resistance is pegged between 1.2525 and 1.2582 in the short-term. GBPUSD price action will be driven by the any news from the ongoing UK Supreme Court’s ruling on PM Johnson’s recent prorogation of Parliament, and Brexit talk from the EU, rather than any commentary from the Bank of England tomorrow.

In addition, the Fed is fully expected to cut US interest rates by 0.25% later today, with markets hoping that Fed Chair Jerome Powell’s subsequent commentary will give a steer towards the Fed’s thinking on the state of the US economy. 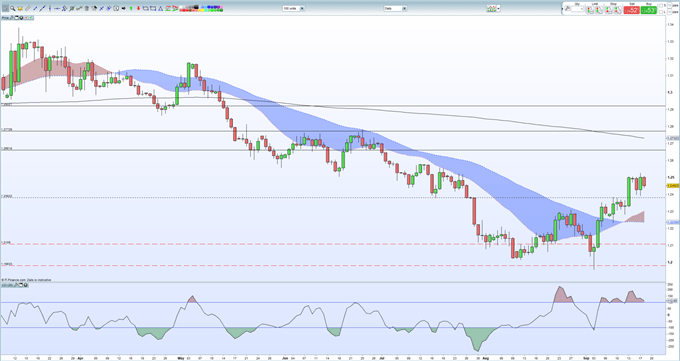 What is your view on Sterling and Brexit? You can let us know via the form at the end of this piece or you can contact the author at nicholas.cawley@ig.com or via Twitter @nickcawley1.