Markets and investors alike are expressing apprehensiveness on Tuesday as time runs out until the highly anticipated September FOMC meeting on Wednesday. Largely responsible for much of the optimism surrounding the Index, dovish expectations have been heightened as the meeting approaches but not all are convinced the Fed can deliver as futures pricing suggests the market’s dovish convictions are slipping. At present, the odds of a 25 basis point cut stand narrowly above 50% - down from the nearly certain 99% just weeks ago. Consequently, the SPY ETF has seen drastic inflows and outflows in recent days as investors place their bets ahead of a decision with immense market-moving potential. 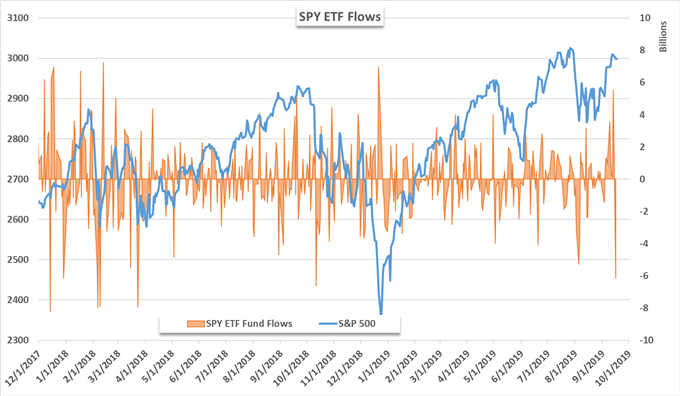 To that end, Monday saw investors pull over $6 billion out of the SPY ETF in the largest intraday outflow since October 2018 when over $6.6 billion fled elsewhere. To be sure, the fund has been dominated by a string of inflows throughout September as SPY racked up a total of $6 billion in net inflows during the period – assisted by Friday’s inflow of $5.5 billion which was the largest net inflow since January. Thus, an outflow of such magnitude given the proximity to the meeting could suggest a late change in attitude among investors that may hint more investors are becoming uncertain the Fed will be unable to meet the market’s expectations.

It is also possible the outflow was spurred, at least in part, by the attack on the Saudi Aramco facilities that sparked a crude oil price rally. Either way, the capital flows and deadlocked price action suggest the market is anything but certain heading into the September Fed meeting, which is somewhat concerning given that the VIX rests at a modest 14.5.

With so much at stake and a depressed “fear gauge,” the potential for an outsized move is heightened. That potential is in turn reflected in an elevated SKEW Index. The Index attempts to calculate the possibility of a move outside one standard deviation and has crept to levels similar to that of late July – around the time of the previous FOMC meeting. With that in mind, waiting on the sidelines until the event has passed may prove to be a prudent play and that same strategy could be why the SPY ETF saw such a large outflow ahead of the Fed meeting tomorrow.

As the decision approaches, be sure to keep a watchful eye on the situation by following @PeterHanksFX on Twitter. Alternatively, the weekly equity webinar “Dow Jones and DAX 30 Levels to Watch Ahead of the Fed,” will precede Wednesday’s event. There we will talk technicals, commentary to look for alongside other equity markets.