The Australian Dollar remained focused like most markets on rising crude prices following last weekend’s drone strike on crucial Saudi infrastructure and failed to move much on news that both Chinese industrial production and retail sales had missed forecasts.

August’s industrial production rose by 4.4% on the year. That was a seventeen and a half year low, well below the 5.2% rise expected and July’s 4.8% gain. Retail sales were up 7.5%, below the 7.9% hoped for. Only fixed asset investment came in as expected, rising 5.7%.

The Australian Dollar can act as a favored liquid currency bet on the Chinese economy given Australia’s huge raw material exports in that direction. It didn’t obviously do so Monday, however, staying up despite the obvious misses in the numbers. 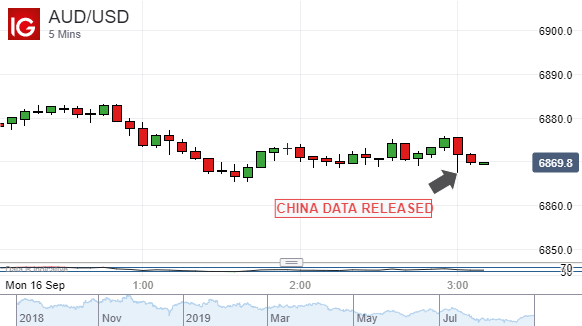 The market’s focus is heavily and understandably on the Middle East, but one other explanation may be that the recent, better tone of trade rhetoric between Beijing and Washington has raised hopes for coming months and perhaps rendered these data more than usually historic in investors’ minds.

The Australian Dollar has certainly bounced quite strongly from the eleven-year lows made against its US cousin back in August. The backdrop has become a lot more Aussie friendly since given signs of a thaw in trade relations between China and the US. This story feeds back to the growth-correlated Australian currency in many ways, be it via general support of global growth prospects or through Australia’s close trading and political links to both main protagonists. 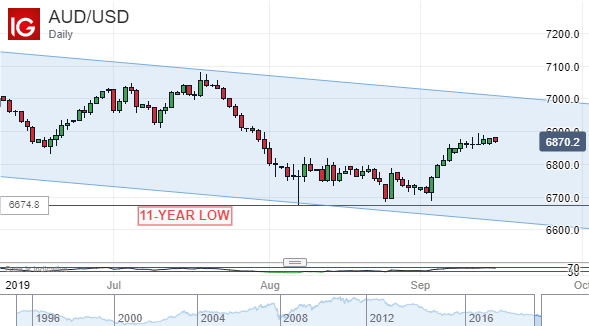 The prospect of more largesse from the world’s monetary authorities has been raised by action already taken last week by the European Central Bank,. This has also given growth-correlated assets a lift.

The current focus on oil prices has seen a modest rethink of this thesis but is unlikely to last as long as Saudi oil production is seen to be recovering in short order.

The Australian Dollar still lacks monetary support of its own, however. The key Official Cash Rate stands at a record low of 1% and is expected to fall further yet. Domestic inflation remains docile too and it should be borne in mind that, despite its recent vigor, AUD/USD remains well within the downtrend channel which has dominated trade since early 2018.