Crude oil futures saw a record spike higher at the Asia open, with Brent crude gapping higher by 18% to hit 4-month highs following drone attacks on Saudi’s Abqaiq oil facility, which Houthi rebels had claimed responsibility for. Given its strategic necessity to the oil market, the Abqaiq oil facility is among the world’s most important facilities. In regard to the reaction across other assets, while this may seemingly help central banks in their task of hitting inflation goals, this has been viewed as economic hit with indices edging lower overnight and in the European session, while safe-havens are better bid.

The Saudi Energy Minister stated that the attack has caused the suspension of roughly 5-5.7mln barrels of Saudi crude production. For context, the latest OPEC monthly report showed that Saudi Arabia had an output of 9.805mbpd in August, meaning that 58% of Saudi’s crude production looks to have been disrupted, this would also be equivalent to 5% of global oil supply.

Since 2016, Saudi Arabia has been steadily drawing down its crude oil stockpiles and now has a stockpile of 188mln readily available, meaning that they have roughly 37 days of cover for the Abqaiq’s oil facility. However, with US President Trump and other nations signalling that they are ready to drawdown their oil inventories, this has helped oil prices for the time being, pulling back from its best levels. Alongside this, focus will also be Saudi’s ability to repair the damage as this will be key to gauge the impact of the supply shock. 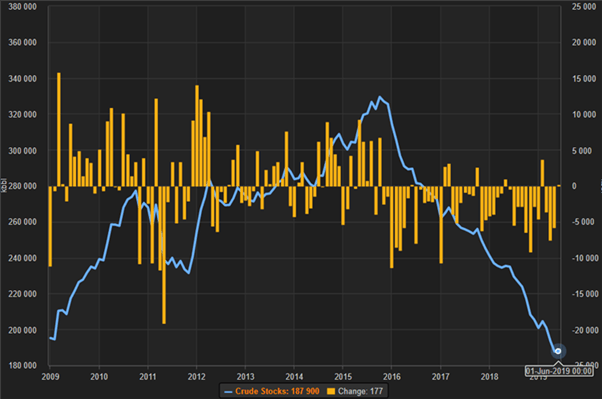 Strait of Hormuz vs Abqaiq

While twice as much oil flows through the Strait of Hormuz, militaries in the West have means in which they can open the waterway. However, with regard to Abqaiq, the facility is hard to quickly repair, circumvent and replace raising the systemic risks to the oil market.

Geopolitical Risks on High Alert for Another Attack

Understandably, geopolitical risks remain elevated as concerns mount that such an attack is not a one-off. Yemen’s Houthi rebels stated that Saudi Aramco’s oil processing plants were still a target and could be attacked at any moment. That said, eyes will also focus on Saudi’s response to the attack.