A robust set of UK wages and jobs data has helped underpin Sterling with the wages data exceeding market expectations. This is the second set of UK hard data to beat expectations this week after Monday’s robust month-on-month GDP growth figure of 0.3% against a prior month’s reading of 0.0%. Yesterday’s industrial and manufacturing production numbers also surprised to the upside.

Commenting on today’s figures, ONS head of labour market statistics David Freeman said:“The employment rate has remained fairly constant at a joint record high for some months now, while the unemployment rate was last lower at the end of 1974. Vacancies continue to fall back from recent record highs, with much of this decline coming from small businesses.”

For all data releases see the DailyFX Economic Calendar

The UK Parliament is now suspended for five weeks and will be not be reopened until the Queen’s speech is read out in the Lords Chambers on October 14. The Queen’s speech sets out the government’s new program of legislation for the coming year. During this time, the opposition will not be able to call for a vote of no confidence in the government and no new bills or motions will be passed.

Sterling continues to trade above 1.2300 against the US dollar on the back of the robust release, but with no other data releases this week and with Parliament closed, the British Pound will once again be blown around by Brexit noise and rumor. The pair have baulked at Monday’s six-week at 1.2384 – also a region of confluence from July highs and lows – and will need a driver to press further ahead. The CCI indicator shows that GBPUSD is overbought at the moment. 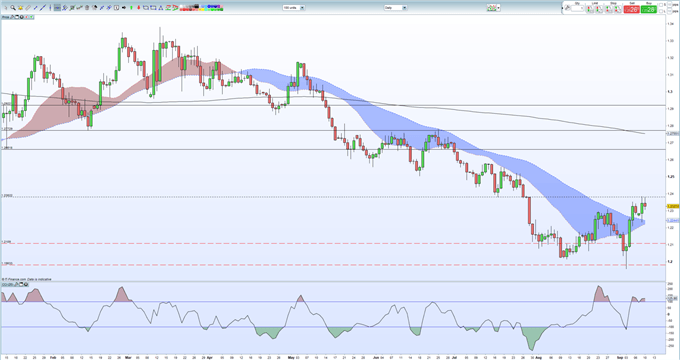