As I highlighted in my Nasdaq outlook on Monday, US Indices witnessed a bullish pop above their recent ranges, which initially seemed to signal appetite for a continuation higher. Contributing to the bullish outlook, equity gains were met with corresponding weakness in typical haven assets like gold, silver and treasury yields which effectively signaled a wider shift in sentiment. That said, Tuesday has delivered a different kind of risk aversion – one solely within the equity sphere. 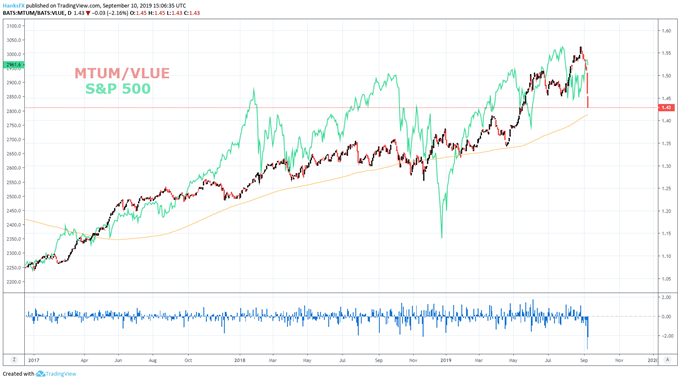 Chart created with TradingView. 1-day rate of change in blue.

Is Value the New Momentum?

The shift in risk appetite can be viewed in the disparity between the Momentum ETF (MTUM) and the Value ETF (VLUE). The former provides exposure to large and mid-cap stocks exhibiting relatively higher price momentum and the latter offers access to large and mid-cap shares with lower valuations based on fundamentals. The funds represent two popular, but fundamentally different, styles of investing and consequently - different risk and return profiles. Since their inception in 2013, the MTUM ETF has returned 149% compared to the 86% gain in the VLUE ETF.

Broadly speaking, the VLUE fund is the “safer” of the two ETFs and it is their relative performances in the last two days that has signaled a shift in attitude among some investors. Suffering the largest one and two-day underperformance relative to the VLUE ETF, MTUM has taken a notable blow as investors rotate into other areas of the market. The rotation can also be seen by the bearish price action on some of the street’s most overbought names like Roku (ROKU), Switch (SWCH) and Shopify (SHOP). 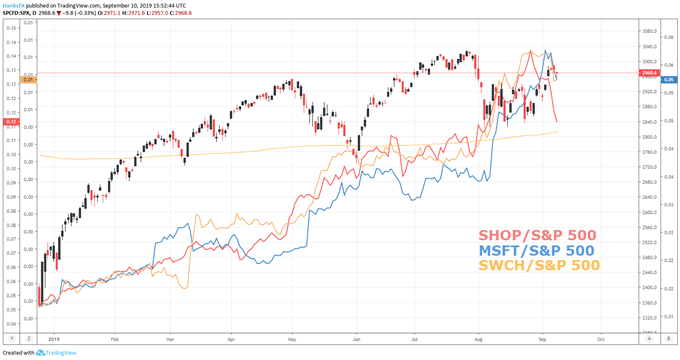 General apprehensiveness to these high-flying and somewhat unproven stocks further signifies a subtle shift in the equity market. While the market in aggregate has traded only slightly lower, over-bought or extended stocks have taken the largest hit – despite their prior immunity in August. Similarly, some of the stocks responsible for large swathes of the price gains in the current bull market have also lagged – namely Microsoft (MSFT) and the broader QQQ ETF. While it is unsurprising to see relatively high-beta stocks underperform the broader market in times of turbulence, it is the rotation out of the entire momentum fund that makes the price action notable and potentially concerning. 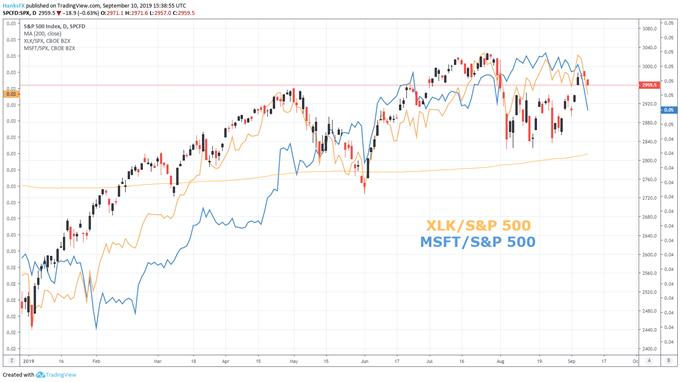 In turn, recent bearishness has seen the S&P 500 threaten to break back into its recent range. A break beneath the upper bound around 2,940 could scuttle the technical pattern offered in early September and allow for the Index to plummet down to the lower bound once again. Teetering on trendline support from the fourth quarter of 2018, bulls will look to keep the S&P 500 above 2,961 and 2,940 in pursuit of a continuation higher. 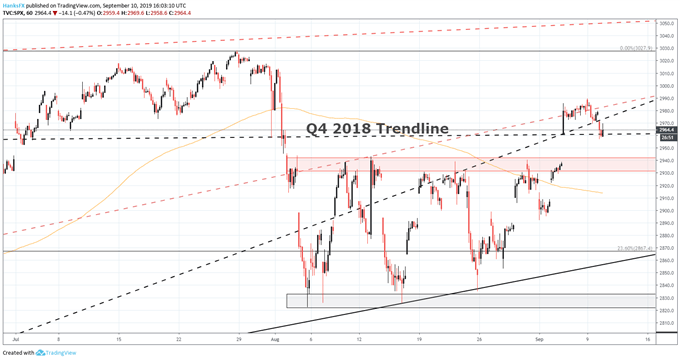 To the benefit of bulls, Chinese news media released an announcement stating the nation is willing to “sweeten a deal” by buying American goods. The statement saw the S&P 500 climb from support as trade relations look to improve. Thus, the Index looks to maintain its footing above support, but downside risks remain as Wall Street looks to ditch some of the best performing stocks in the year-to-date.