Crude oil prices have recovered close to eight percent in less than a week amid renewed risk appetite after the US announced President Donald Trump will be meeting with his Chinese counterpart Xi Jinping in October. The buoyancy in optimism has supported sentiment-linked assets – like crude oil – which may be given an additional tailwind if supply-disruption risks are resurrected as US-Iran relations continue to sour. 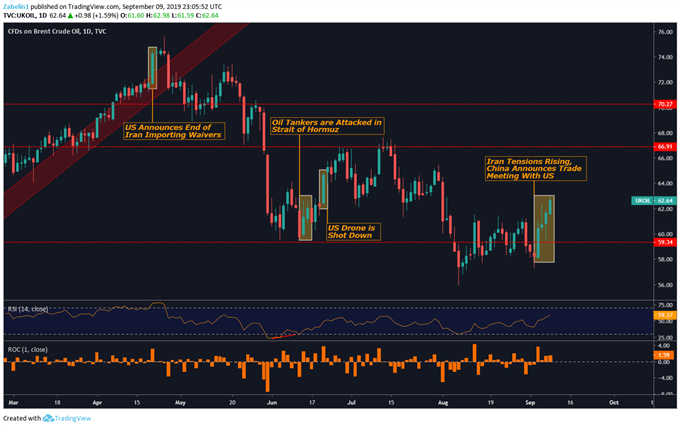 Iran Tensions: What is Happening?

On Sunday, the US announced that it will continue its policy of sanctioning any party importing Iranian oil or doing business with the Revolutionary Guards. The US has been aggressively pressuring Iran by severely restricting cross-border sales of its most crucial exports: crude oil and petrochemicals. These policies are aimed at forcing Tehran to comply with stricter enrichment parameters and curb its ballistic missile program.

In response, Iran has continued to violate the conditions outlined in the original 2015 nuclear agreement by increasing the uranium purity levels beyond the stipulated allotments and installing new centrifuges. The EU, on the other hand, has attempted to preserve the deal by offering several economic inducements to avoid a complete collapse of the agreement. The efforts have borne little fruit and have in fact angered Washington.

Crude oil prices in part have been lifted by these risks against a favorable backdrop of market optimism. However, if US-China trade relations deteriorate once again, the “potency of politically-induced spikes” may be undermined as traders re-assess the fundamental outlook. Given how trade negotiations between Beijing and Washington have proceeded thus far, a return to a state of hostile relations is not out of the question.

Crude oil prices were also given a boost when the newly-appointed Saudi Energy Minister Prince Abdulaziz bin Salman said that there would not be any “radical shifts” in Saudi Arabia’s oil policy. “One person comes one person goes…I think fundamentally Saudi Arabia’s energy policy is resting on few pillars. The pillars don’t change”. He also signaled he intends on maintain to supply cuts that were previously agreed upon.

However, he is now tasked with overcoming the same obstacle as his predecessor, Khalid al-Falih and will have to find a way to help lift crude oil prices. Time is not the newly-appointed ministers’ friend as Saudi Arabia prepares the initial public offering (IPO) of Aramco, a state-owned oil giant – at least for now. Looking ahead, traders will also be closely watching the release of OPEC’s monthly oil market report.