As is usually the case, the Apple iPhone launch date is among the biggest events of the year for the company and Apple investors. While the share of revenue generated from the iPhone has decreased over time as Apple diversifies, it still makes up over half of the company’s revenue and therefore remains integral to the growth outlook for the company.

Since the 2011 iPhone launch, Apple shares have on average gained 1.5% in the following 3-months (Hit ratio = 75%) and over 10% in 6-months (Hit ratio = 62.5). That said, the external environment can of course play a role in the company’s performance. This had been evidenced last year as concerns over slowing global growth amid the US-China trade war sparked a violent Q4 sell-off in global equity markets. 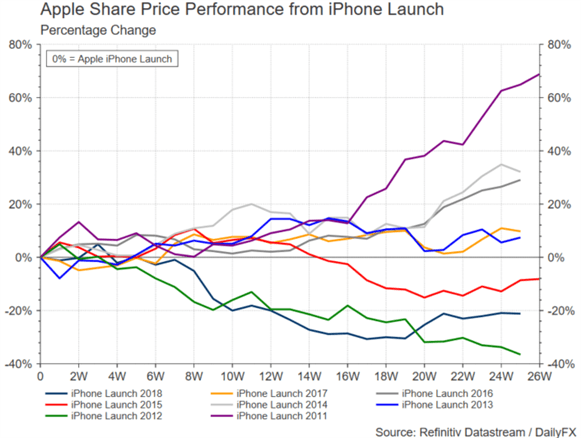 The other important date for Apple investors will be December 15th, where the US administration is expected to place fresh tariffs on Chinese made goods, including cellphones and laptops, therefore providing a headwind for Apple going forward. However, despite this, Wall Street remain optimistic on Apple shares with a median price target of $223.74 (4.4% upside). 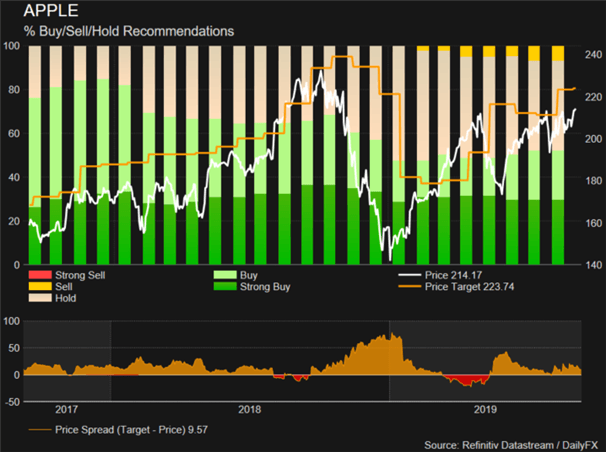 Apart from AAPL and its immediate suppliers, the broader equity market should also take note of the event. Viewed as a bellwether of market performance by some due to its size and track-record, Apple can carry significant sway over stock sentiment - as evidenced by January’s currency flash crash following Apple’s forecast downgrade.

During the event, Apple’s stock price traded cautiously higher as the Cupertino-based company unveiled its newest products, services and subscriptions. Critically, Apple began the event with the unveiling of new arcade and video content subscriptions – offering insight on one of the new entrants into the streaming space alongside Netflix (NFLX), Amazon (AMZN) and Disney (DIS). Details of the streaming service saw shares of NFLX and DIS trade lower alongside a pop in AAPL shares. 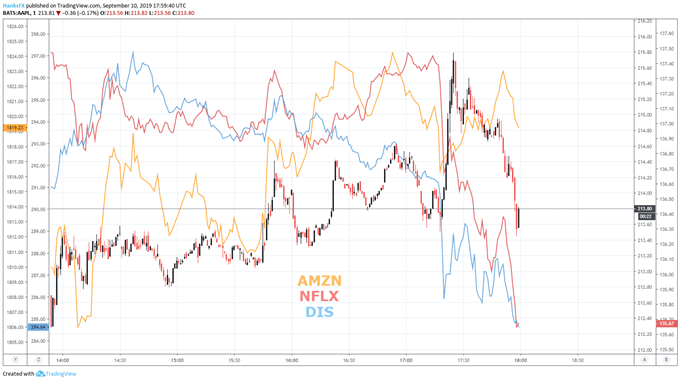 Further, the company’s venture into services and shows its attempt to diversify revenue away from the iPhone and into a more subscription-based model. With that in mind, services should play a larger role in Apple earnings moving forward.