The Australian Dollar slipped to session lows on Tuesday as Chinese inflation data came in a little stronger than expected at the consumer level while factory gate prices continued to wilt.

August’s official Consumer Price Index rose 2.8% on the year, above the expected 2.7% rise and matching July’s gain. Producer prices slipped 0.8%. Their fall accelerated from the 0.3% contraction seen in the previous month, but it wasn’t as severe as the expected 0.9% slide.

There is a possible conundrum here for policy markets. The quite-elevated level of consumer prices may suggest that Beijing will have to take measures to rein them in, but weak producer prices suggest that investment and employment may already be coming under pressure.

Given that it’s not surprising perhaps that the data should have produced a modest, risk off move against the Aussie. 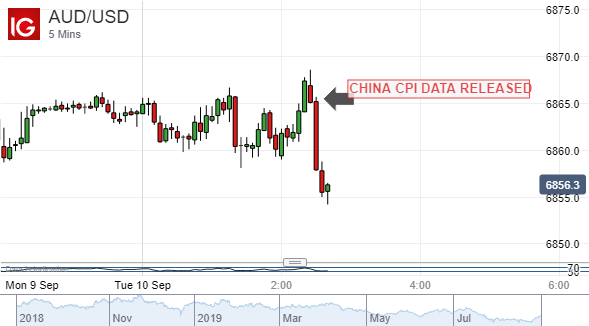 On its daily chart the Australian Dollar continues to reap the benefit of a thaw in trade relations between China and the US.

After many fractious weeks, high-level talks between the two are apparently still on next month. US Treasury Secretary Steven Mnuchin said on Monday that a ‘conceptual agreement’ exists for enforcement around intellectual property theft- a major bone of contention. It has also been reported that China offered last week to increase its purchases of US agricultural products if restrictions on telecom giant Huawei were lifted and tariff rises delayed.

However Mnuchin also said that he expects the Governor of the People’s Bank of China to attend the next round of trade talks as he wants to discuss the level of the Yuan.

AUD/USD is at highs not seen since late July as this better trade tone has investors reassessing global growth prospects to which the Aussie’s performance is so often linked. 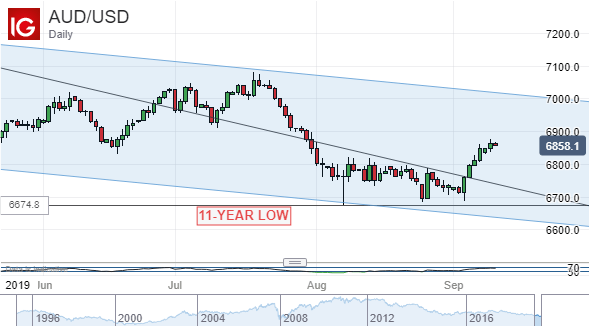 For all that ot’s well worth bearing in mind that AUD/USD remains close to eleven year-lows and well within the long downtrend channel which has endured on the daily chart since late 2018.

The Australian currency still faces record-low interest rates and a market certain that they will be falling further yet. This domestic reality is likely to reassert itself at some point even if for the moment AUD/USD is driven higher by broader risk themes.