US Dollar price action is off to a modest start this week with the DXY Index rising by 0.23% to 98.24 halfway through Monday’s trading session. The basket of US Dollar currency pairs appears to be holding onto support provided by its 20-day simple moving average and 38.2% Fibonacci retracement of its bullish leg from June 25 to September 03 – a point of technical confluence we highlighted in our previous US Dollar price volatility report. 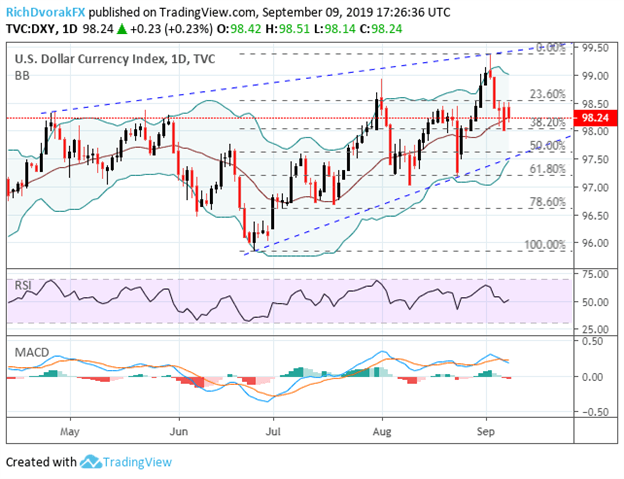 Looking beyond the broad DXY US Dollar Index, spot GBPUSD warrants particular attention as the Brexit saga drags on. The latest Brexit drama is already rattling UK Parliament so far this week with news that House of Commons Speaker John Bercow will step down from his post. More importantly, markets await another vote by British MPs on whether or not to support PM Boris Johnson’s call to hold a snap general election scheduled for late Monday. While MPs already rejected PM Johnson’s motion to call a general election last week, Parliament subsequently passed a bill that now requires the Prime Minister to request another Brexit deadline extension to prevent the UK’s no-deal departure from the EU.

Now seeing no-deal Brexit as a less-pronounced risk, a snap general election may garner enough support from the UK government’s opposition led by Labour Party’s Jeremy Corbyn. GBPUSD has skyrocketed so far this month owing to the reduced likelihood of no-deal Brexit, but the possibility that British MPs might approve Monday’s motion to hold a general election remains a daunting downside risk to the Pound Sterling. Furthermore, UK Parliament will be prorogued – or suspended – after Monday’s business is concluded for roughly a month. It is worth pointing out that the sharp rally in British Pound can be largely attributed to forex traders unwinding GBPUSD short positions suggested by the latest CoT report detailing speculative positioning.

That said, another influx of Brexit uncertainty and rise in the probability of no-deal could spark another surge in GBPUSD short positions which stands to send spot prices whipsawing back lower. Even in the event no general election is held and PM Boris Johnson is legally obligated to request another Brexit delay beyond the current October 31 deadline, the appeal requires unanimous approval from the EU27 who have already voiced concerns over UK “can-kicking.” Nevertheless, GBPUSD is expected to be the most volatile US Dollar currency pair out of majors. In fact, GBPUSD overnight implied volatility of 9.59% in in the top 70th percentile and above its 12-month average reading of 8.50%.