A series of stock-specific developments could look to sway the Nasdaq’s direction early this week as Google faces the scrutiny of regulators and Apple (AAPL) announces its newest product lineup. Together, the two tech-giants account for nearly 19% of the Index – affording them significant control over the Nasdaq and the QQQ ETF. Consequently, traders should look to the two behemoths for early insight into broader price action. 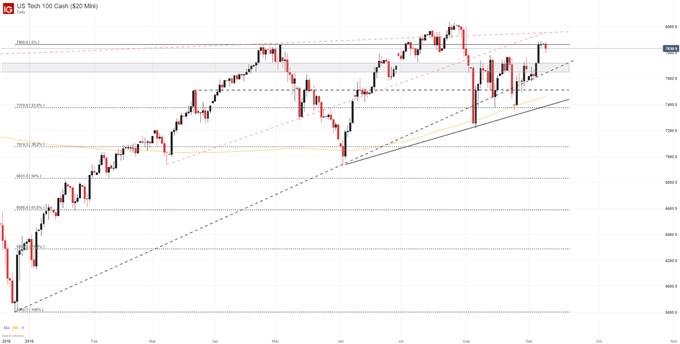 According to the Wall Street Journal, the bipartisan-probe into Google officially began on Monday as regulators look to crack down on practices that some believe to be monopolistic. The probe enjoys widespread support from both parties, suggesting it may stand the test of time even as members in Washington shift. Further, almost every state has representation from the attorney generals within the investigating group.

Although GOOG is the sole target at present, regulators have also considered investigations into Facebook (FB), Apple (AAPL) and Amazon (AMZN). If the investigation is expanded to include all four corporations, four of the five largest publicly traded companies would be under investigation. Collectively, over 42% of the Nasdaq 100 would be ensnared in regulatory scrutiny - which would create significant uncertainty for the Index’s largest components. For the time being, the investigation should have a limited impact on stock prices until concrete details are fleshed out and potential fines are outlined.

On the other hand, Apple’s product announcement on Tuesday may posses significantly greater potential to impact price in the short-term. In the past, product announcements have been accompanied by notable volatility in the stock price which has occasionally spread to suppliers. Consequently, Apple’s event on Tuesday could be the driving force behind sentiment and price action for the Nasdaq.

While Google and Apple weather their respective events, the outlook for the broader Index remains cautiously optimistic. A notable improvement in US-China trade relations has helped to buoy price in the near-term and Monday saw the release of robust consumer credit data. As a reflection of consumer appetite, the $7.3 billion beat - $23.29 billion versus $16 billion expected – suggests American consumers are not being dissuaded from spending their hard-earned capital which bodes well for retail sales data and corporate earnings moving forward.