Stocks Mostly Up On Data Relief But Japanese Automakers Struggle

Asia-Pacific stocks were mostly higher on Wednesday as the day’s economic data provided some relief. Japanese automakers were put under pressure, though, by news of collapsing sales in South Kore as the two countries’ diplomatic differences endure.

Australia’s second-quarter Gross Domestic Product data came in exactly as the markets expected, prompting some gains for the country’s currency as there had been some late fears of a very soft number, exacerbated by worries to that effect expressed on Tuesday by Prime Minister Scott Morrison. In the event ,1.4% annualized growth was hardly spectacular but it was enough for the currency markets.

Much of what growth there was came from government spending and exports, with the consumer side still soft, but weakness there is hardly new.

Meanwhile China’s private service sector was found to have put in its best performance for three months in August. The Caixin Purchasing Managers Index exceeded even the surprise strength seen in its manufacturing counterpart earlier this week.

The Shanghai Composite was up 0.2% at the start of its afternoon session The Hang Seng did even better, adding more than 1%. The Nikkei 225 was more circumspect but that’s hardly surprising given news that auto sales to South Korea fell by 57% on the year in August as consumers boycotted Japanese goods in response to diplomatic tensions. Toyota, Mazda and Mitsubishi all saw their stocks slide, but Honda managed to stay up.

Australia’s ASX 200 was down 0.7%. It appeared to be alone in tracking weaker US markets in the previous session. However, its plentiful gold mining names saw big gains as the price of their product continues to rise.

The US dollar remained beleaguered by weak domestic manufacturing data while the British Pound got at least some respite from its recent remorseless hammering as lawmakers appeared to gain the upper hand in control of the UK’s Brexit position. That situation remains very fluid, however.

The greenback’s slide has seen AUDUSD challenge the downtrend visible on its daily chart through August and indeed trade above it through Wednesday’s session. 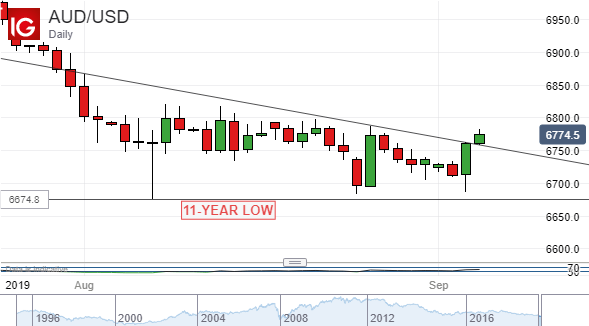 The much longer and more entrenched downtrend in place since the end of 2018 remains very much in place however and looks most unlikely to be overcome any time soon. The futures market prognosis of two further interest rate cuts remains in place.