The UK Economy is Likely to Contract as Brexit Confusion Continues

UK PM Boris Johnson’s defeat in the House of Commons late Tuesday has left his Brexit plans in disarray with Parliament now more likely to lead the way forward. A cross-party Remainer motion to delay the UK’s departure from the EU until January 31, 2020 was passed and is now expected to be legislated later today before going to the House of Lords. PM Johnson who now wants to call a General Election will need support from across the House to get the 2/3 majority necessary and this will prove difficult until the Remainer’s bill is passed.

The latest Markit IHS PMIs highlight the effect that Brexit is having on the UK economy with the dominant services sector this year reporting ‘its worst performance since 2008, with worrying weakness seen across sectors such as transport, financial services, hotels and restaurants and business-to-business services’, according to Chris Williamson, chief business economist at IHS Markit. The index fell to 50.6 in August from 51.4 in July, signaling only marginal expansion with Markit suggesting that UK Q3 GDP will contract by 0.1%.

‘While the current downturn remains only mild overall, the summer’s malaise could intensify as we move into autumn. Companies have grown increasingly gloomy about the outlook due to the political situation and uncertainty surrounding Brexit, adding to downside risks in coming months. With the exception of the slump in sentiment after the 2016 referendum, August saw service sector firms at their gloomiest since the height of the global financial crisis in early 2009’, according to Williamson.

What is the Brexit Backstop and How Does it Impact the British Pound?

Against this backdrop, Sterling (GBP) remains volatile with political headlines driving price action. GBPUSD trades around 1.2180, in part due to today’s weakness in the US dollar, while investors are now starting to, at the margin, price out a hard Brexit, giving Sterling a small uplift. While the pair have recovered from Tuesday’s 1.1959 low print, the bear trend from early-March remains intact and will only be convincingly broken when there is clarity on Brexit. 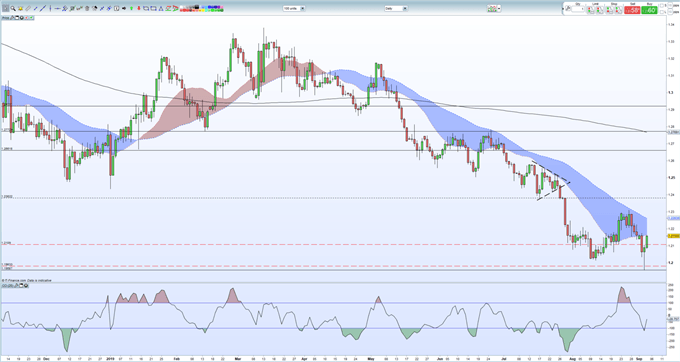 IG Client Sentiment data show that 73.7% of retail traders are net-long of GBPUSD, a bearish contrarian indicator. However, recent daily and weekly positional changes give us a mixed trading bias.