Equities: Global equities are notably firmer following the announcement by Hong Kong’s Carrie Lam that the controversial extradition bill that sparked protests for 3-months will be withdrawn. Consequently, this has spurred risk-on sentiment with European and US equity futures trading higher throughout today’s session. That said, following yesterday’s surprise contraction in the US ISM report, eyes will be on key tier 1 US data during the weak, particularly as the weak ISM employment subcomponent raises concerns over this weeks ADP and NFP reports.

GBP: The first day back to parliament for PM Johnson kicked off with defeat in the House of Commons after a cross-party motion to delay the UK’s departure from the EU until January 31st, 2020 had been passed. In response, PM Johnson called for a snap-election to take place on October 15th, however, with opposition parties viewing this as a way to push forward with a no-deal Brexit, the PM is expected to struggle to achieve the 2/3 of MPs needed to support him until the delay bill is passed. As such, while this has seen a no-deal Brexit threat edge lower, thus sparking a short squeeze in GBP/USD, the road ahead remains an uncertain one for the Pound.

EUR: Better than expected Eurozone services PMI data has helped the Euro recover, which in turn has reclaimed the 1.1000 handle. Alongside this, the Euro had been further boosted by the ECB President nominee, Christine Lagarde, who stated that the ECB must be mindful with regard to negative effects of unconvential polices, suggesting that the next ECB President may not be major advocate of significant policy stimulus.

CAD: The Canadian Dollar has traded in subdued fashion despite the 2% surge in Brent crude futures. Market participants await the BoC monetary policy, where interest rates are likely to be left unchanged. However, focus will be on whether the central bank sets the tone for a potential move at the October monetary policy report where money markets are pricing in a 66% chance of a 25bps cut. (full analysis) 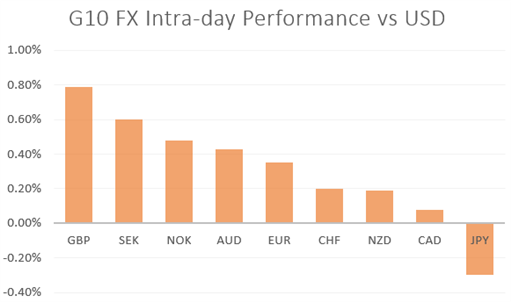