Bank of Canada (BoC) governor Stephen Poloz is expected to announce that the overnight interest rate will remain unchanged at 1.75% when the central bank meets today. At the last meeting in July, the central bank noted that while the Canadian economy is returning to potential growth, ‘the outlook is clouded by persistent trade tensions’. Financial markets expect no rate change today but are pricing in a roughly 66% chance of a 0.25% interest rate cut at the October 30 meeting which will include the central bank’s latest monetary policy report.

Since the last BoC announcement, trade tensions – especially between the US and China – have increased with both sides announcing additional trade tariffs. This backdrop has weighed on the price of oil, which in turn has put downward pressure on the Canadian dollar. The Canadian energy sector accounts for around 11% of nominal GDP and produced revenues of $14.1 billion in 2017.

The daily USDCAD chart shows that the rally that started in mid-July is running out of momentum and this move may continue if the central bank’s press announcement today is more dovish than expected. This week’s price action shows two bearish ‘shooting star’ candles with a long upper shadow and very little lower shadow. Today’s bearish candlestick is more likely due to US dollar weakness, but the chart may be pointing to a retrace back to the 1.3225 – 1.3245 area. The 200-day moving average at 1.3293 stands in the way of this move lower. The CCI indicator shows the pair moving out of overbought territory. To the upside, a break and close above 1.3350 should be watched, before Tuesday’s multi-week high at 1.3383 comes into view. 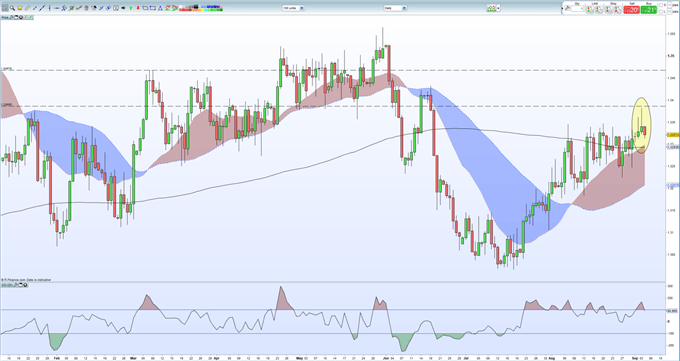 What is your view on the Canadian Dollar – bullish or bearish?? You can let us know via the form at the end of this piece or you can contact the author at nicholas.cawley@ig.comor via Twitter @nickcawley1.