With British MPs now in control of Parliament’s agenda, the House of Commons is set to debate and vote on a motion during tomorrow’s session aiming to delay the October 31 Brexit deadline. The move comes in response to last week’s Brexit development when PM Boris Johnson received approval from the Queen to suspend Parliament, which was believed to cue up a no-deal departure from the EU amid ongoing gridlock.

Following today’s results, a frustrated PM Boris Johnson stated that “Parliament is on the brink of wrecking any Brexit deal,” adding that he will call for a general election if Parliament votes to delay Brexit on Wednesday. On the other side of the isle, Labour Party leader Jeremy Corbyn stated that he welcomed tonight’s vote and will support a vote to call a general election contingent on no-deal Brexit being taken off the table. 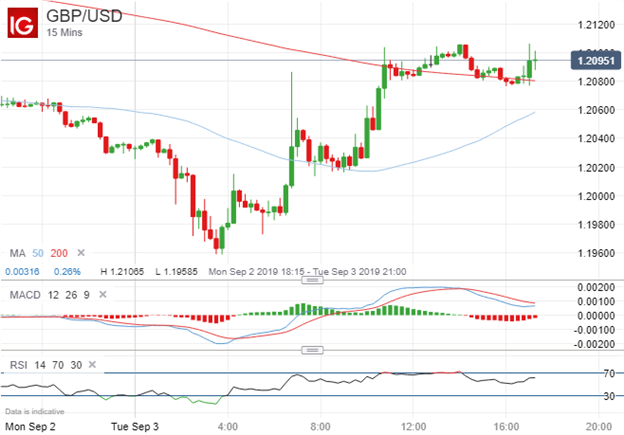 Prior to today’s vote in British Parliament, GBPUSD sank below the 1.2000 price level – its weakest since January 2017 – as the Pound Sterling continues to succumb to ongoing Brexit woes. Yet, the British Pound quickly caught bid on news that the Conservative Party headed by PM Boris Johnson lost majority in parliament after a Tory MP defected to the Liberal Democrats which foreshadowed Tuesday’s vote. GBPUSD extended its intraday rebound in the run-up to the latest Brexit vote results and held onto gains when expectations were confirmed.

The Pound Sterling may continue to climb off recent lows as the probability of no-deal Brexit recedes. However, embarking down the path toward another general election may simply stem the bleeding for now as it will just “kick the can” down the road. That said, lingering political uncertainty looks to continue weighing negatively on the UK economy and British Pound. Although, if MPs fail to pass their last-ditch effort on preventing no-deal Brexit on Wednesday, PM Boris Johnson may get his way and steer the UK closer toward departing the EU on October 31.