GBP/USD Breaks Down to Flash Crash Lows on Brexit Showdown

GBP/USD is once again under pressure as the Brexit showdown between Tory rebels and the government highlights the current constitutional crisis that is weighing on the currency. The pair made a break below the psychological 1.20 handle, hitting a low of 1.1959, which marks the lowest level since the October 2016 Sterling flash crash. Focus today will be on the debate surrounding the Brexit delay bill (looks to delay Brexit till January 31st, 2020), whereby Prime Minister Johnson has threatened to call a general election by October 10th if passed. As a reminder, under the Fixed Term Parliaments Act, for an election to take place, 2/3 of MPs must support this.

As it stands, according to opinion polling, the Conservative Party are comfortably ahead of its opposition parties at 33% with Labour at 23%. As such, a snap election in the Autumn is not only going to increase the political uncertainty but also raise the risk of a more pro-Brexit government, which in turn keeps risks firmly titled to the downside for GBP. 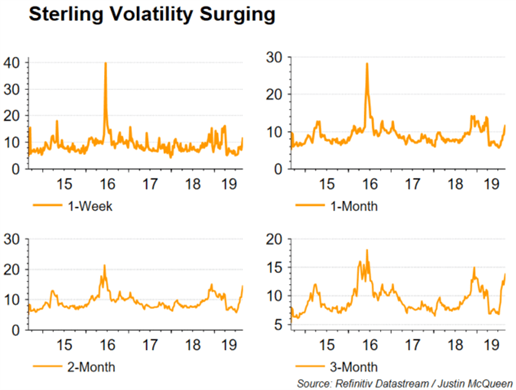 As the risk of a snap election looms, implied volatility has been on the rise with the 1-week tenor at the highest level since April, while 2-month expiries are nearing the levels seen at the 2016 Brexit referendum as investors continue to price in the risk premium attached to a no-deal Brexit. With that said, Sterling is expected to remain the largest source of volatility across the G10 FX space. Elsewhere, with speculative shorts hovering near extreme levels, there is of course a possibility for a sharp snapback higher, provided the risk of a no-deal Brexit eases slightly. However, as has typically been the case, a sharp move higher tends to provide opportunities to fade. 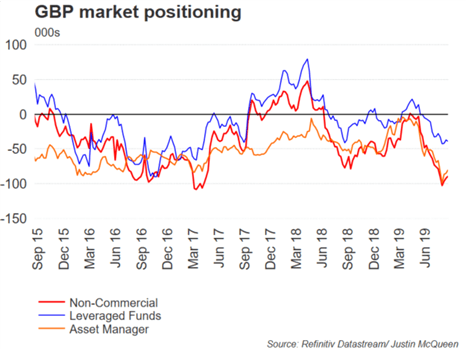