Canada’s Q2 GDP report came in hotter than expected at a solid 3.7% annualized rate which compares to the 3.0% estimate and 0.5% reading in the period prior. The Canadian Dollar, measured via the CXY Canadian Dollar Currency Index, jumped immediately after as forex traders reacted to the headline GDP figure crossing the wires. The loonie is still up modestly so far during today’s trading session, but upside has begun to fade as markets digest the details of the Q2 Canada GDP report. 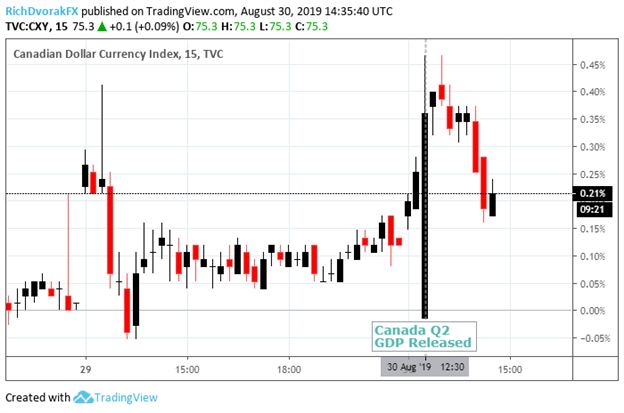 Canadian GDP growth during the second quarter was largely attributed to a healthy 3.2% rise in exports – predominantly led by an increase in energy and fishing product exports to the tune of 5.9% and 15.2% respectively. Positive contributions to GDP growth were also credited to government outlays and falling imports.

Yet, Q2 GDP growth in Canada was bogged down by a notable 1.6% drop in business investment and uninspiring slowdown in household spending to 0.1% from 0.7% in the first quarter. Looking forward, markets will likely await the upcoming interest rate decision from the Bank of Canada slated for next week for insight on the central bank’s latest monetary policy stance. 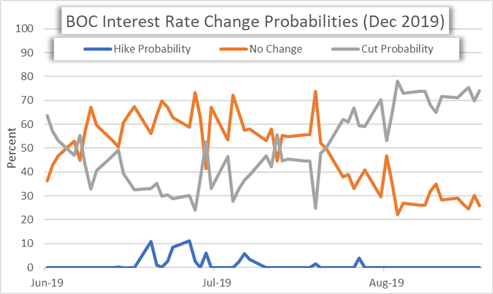 While the BOC is largely expected to leave interest rates unchanged at 1.75% according to overnight swaps pricing, commentary provided by Governor Poloz stands to underscore the BOC’s relatively hawkish position. In fact, Friday’s Q2 GDP data beat sent the probability of a September BOC interest rate cut down to 5.2% from 17.7% a week ago.

Although, the BOC and Governor Poloz could hint at openness to a dovish shift in monetary policy in light of fundamental headwinds – particularly in response to the impact that ongoing global trade tensions are having on business investment and future outlook – and remains a downside risk to the Canadian Dollar. This is suggested by the uptick in the probability of an interest rate cut before year end which just increased to 74.0% following the Q2 GDP data from yesterday’s reading of 69.8%. 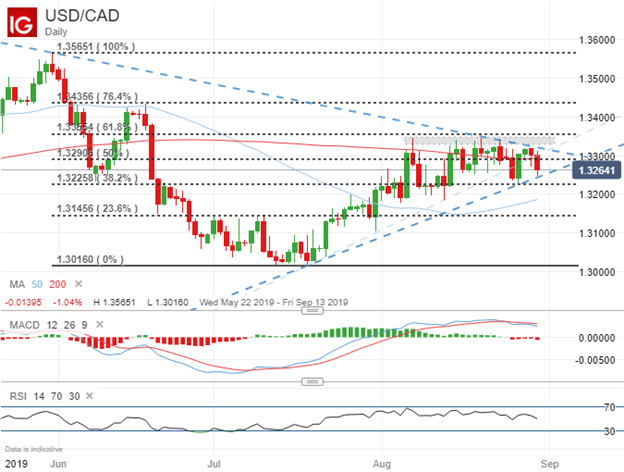 Turning to the charts, we see that spot USDCAD continues to show signs of wanting to edge lower, but is finding technical support from the currency pair’s bullish uptrend that still remains intact. Spot USDCAD has dropped beneath its 200-day simple moving average and mid-point retracement of its May 31 swing high, yet today’s drop could chalk up to be another head-fake similar to what was witnessed on August 26 when prices probed the prior-standing uptrend line. 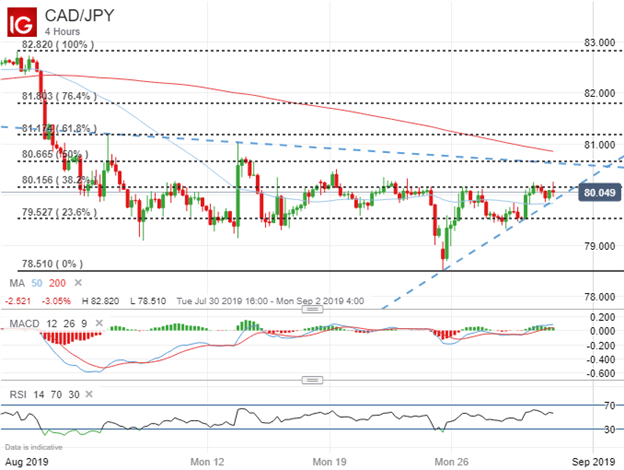 Signs of waning upward momentum for the Canadian Dollar could also be hinted at by spot CADJPY running out of steam as the currency pair approaches technical resistance posed by its 38.2% Fibonacci retracement of its August trading range. If the short-term uptrend beginning to form since trading resumed this week fails to keep spot CADJPY afloat, prices may likely drift down toward the 23.6% Fib around 79.500. This bearish pivot will likely warrant more credence if spot CADJPY slips below its 200-SMA on the 4-hour chart and MACD crossover which may be looming. 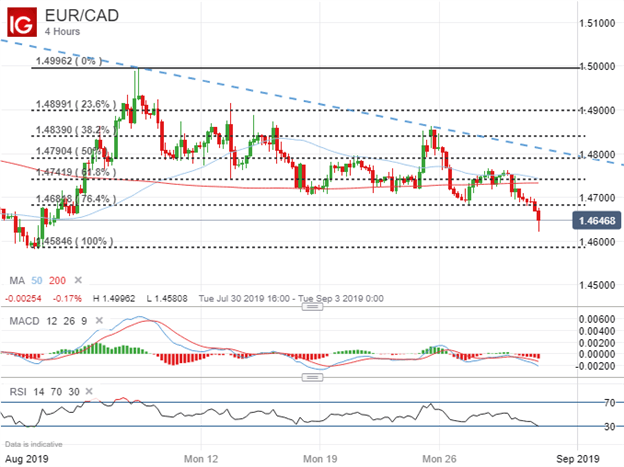 Alas, recent Canadian Dollar strength is most observable when looking at spot EURCAD. Today’s push by the loonie has sank spot EURCAD below support from technical confluence around the 1.4700 handle, which could open up the door to retest year-to-date lows near the 1.4600 level.