Asian stocks look set to round out the week with broad Friday gains. The latest twist in the US-China trade war saga seems a positive one with Beijing having hinted the day before that it will not immediately match the latest round of US tariffs.

The sinister inversion of the US yield curve endures, however. This possible harbinger of recession has understandably kept a lid on investor exuberance. Still, the Nikkei 225 was up 1.4% with robot-builder Fanic enjoying a buoyant session. The Shanghai composite added 0.2% while the Hang Seng in Hong Kong was 0.7% to the good. That was despite news of the arrest of some protest leaders in the troubled territory. South Korea’s Kospi was up 1.9% after the Bank of Korea left benchmark lending rates alone. The market had expected this after July’s cut. Chip -maker Hynix led the gainers.

Meanwhile Sydney’s ASX 200 gained a chunky 1.5%. The big banks made gains, with Westpac out in front, as more risk averse plays such as gold miners wilted. Shipbuilder Austral’s results found favor with investors while machine-learning data name Appen bounced back smartly from this week’s result-driven slide.

The US Dollar made some initial gains on the counter-cyclical Japanese Yen as risk appetite seemed to revive, but it had retraced much of these by the Asia Pacific afternoon. Likewise the Australian Dollar faded a little too, apparently continuing a theme of the week which has seen the foreign exchange market perhaps less enthusiastic about trade progress than stocks seem to be.

The Australian Dollar faces an interest-rate decision from the Reserve Bank of Australia next week, at which no change to the record-low Official Cash Rate is expected, even though the market remains certain that it is headed lower over time.

Growth data from the second quarter will also be released, with signals so far as to economic performance decidedly mixed.

AUDUSD remains quite immune on the daily chart to improvements in risk appetite elsewhere. 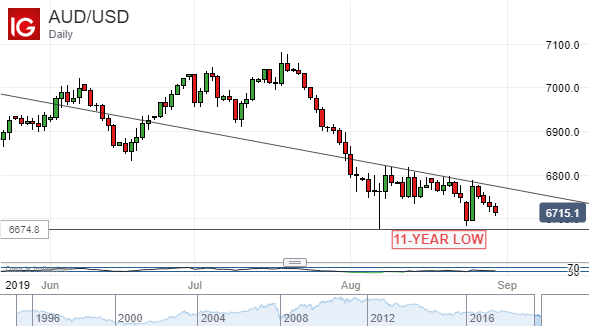 August’s 11-year low remains close to the market, with the latest downtrend apparently only becoming more entrenched as next week’s packed calendar approaches.