The Australian Dollar continues to struggle even despite the recent de-escalation in the US-China trade war. While Thursday’s drop in spot AUDUSD can be largely explained by widespread strength in the US Dollar, various sentiment measures point to continued bleak Australian Dollar price outlook. As such, we maintain our view that spot AUDUSD price action seems ripe for a major technical break. 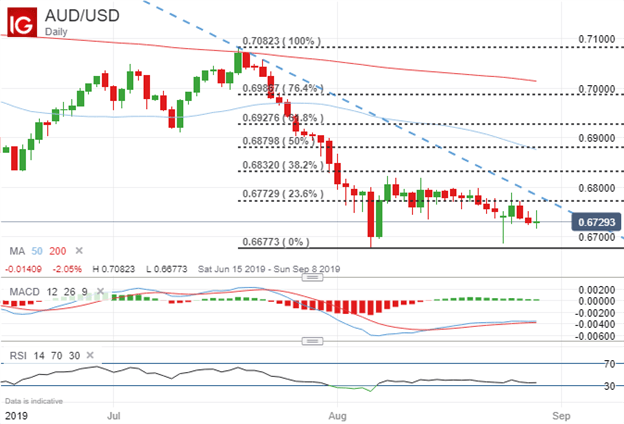 Looking beyond charts and the US-China Trade War, Australian Dollar currency traders are likely focusing attention on the upcoming RBA meeting which might also justify why the recent direction of AUDUSD and AUDJPY seems timid. According to overnight swaps, rate traders are currently pricing a 10% probability that the RBA cuts rates next week. However, the potential for dovish outlook and foreshadowed monetary policy accommodation remains a threat to bullish Australian Dollar prospects. In the meantime, AUDUSD may very well continue to slump so long as spot prices remain below its 50-SMA shown below on the 4-hour chart. 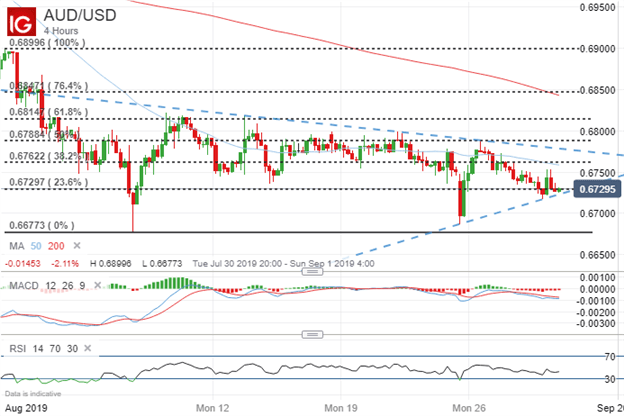 The lack of enthusiasm behind the currency pair’s staged comeback is also depicted by the series of lower highs throughout the month. As such, technical confluence around the 38.2% Fibonacci retracement level of spot AUDUSD’s July 30 high stands to serve as a daunting obstacle to upside progression. Nevertheless, spot AUDUSD could be kept afloat around the 0.6730 price level with the currency pair potentially looking to the 23.6% Fib as well as the short-term uptrend line attempting to develop for support. 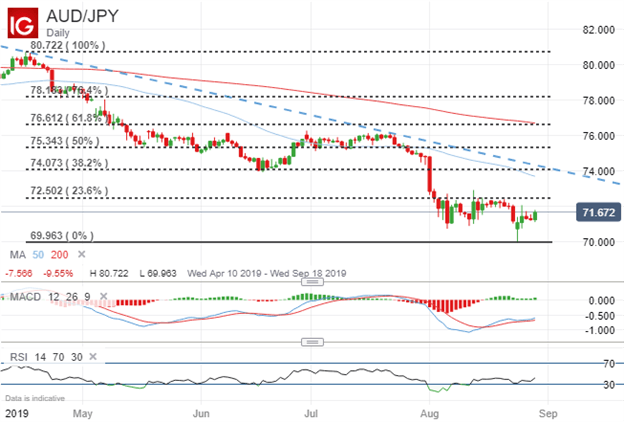 With market volatility subsiding and risk appetite recovering again as the US-China trade war reportedly de-escalates, sentiment-geared AUDJPY has attempted to rebound off its lowest level in roughly a decade. Although, last week’s sharp selloff in risk assets like the S&P 500 Index amid tit-for-tat tariff threats has largely been reversed yet Australian Dollar price action appears to be lacking the same influx of bullish conviction. Aside from the potential of a looming RBA interest rate cut which may be hinted at next Tuesday, another possible reason for the lack of a comeback in spot AUDJPY could be that currency traders doubt the supposed improvement in the US-China trade war – or fear that tension will soon return.