Bond markets continued to lead equity through Asia’s Thursday with an often reliable recession signal from the US Treasury market unsurprisingly snuffing out any glimmers of optimism elsewhere. Political ructions in the UK over Brexit continue to keep a lid on risk appetite too.

The 30-year Treasury yield slid to a new record low of 1.907% on Wednesday before tracking back a little higher. Obviously, the acceptance of such tiny rewards for long-term lending hardly suggests that bond investors are hopeful of much growth ahead, but the real problem remains in the spread between two and ten-year debt. Here the feared inversion of the yield curve goes on. This means that longer-term debt yields less than short paper, a situation which in the past has reliably signaled recession.

It was always going to be tough for any news-flow to negate this huge worry and sure enough none did Thursday. The Nikkei 225 was down 0.2% as the Tokyo afternoon session kicked off, which was about par for the course across Asia. The Shanghai Composite was off by 0.1% as was Australia’s ASX 200. The Aussie index was hit by weakness in Woolworth’s shares which slipped considerably following the release of results.

The foreign exchange market saw a calm Asian session in which the Japanese Yen fought back a little against a US Dollar which had managed to rise towards the end of Tuesday action in the US. With risk appetite bruised the Australian and New Zealand Dollars also inched lower.

NZDUSD has endured 15 down days out of the past 21. 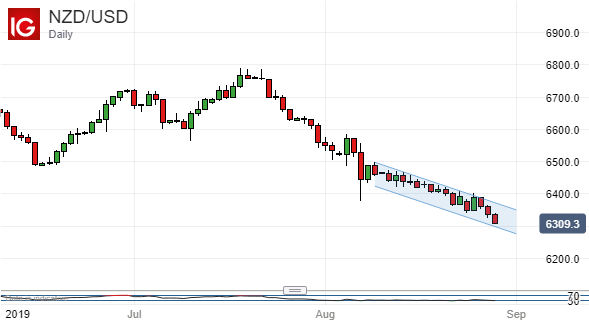 The current downtrend is itself merely an extension and acceleration of the falls seen since mid-July.

The aftershock of this month’s heavy, half-percentage-point interest rate cut from the Reserve Bank of New Zealand is still to be seen, adding to the effects of general risk aversion. For as long as trade worries drive the market it is hard to get bullish on either the Kiwi or the Aussie.

The coming European and US trading day will offer plentiful economic interest, with top billing probably due to the revised second-quarter GDP figures out of the US.