The S&P 500 surged on Thursday after it was announced China would not retaliate to the most recent tariff increase and that the two trade war belligerents could meet in September to negotiate. While price action reflects boisterousness among market participants, it is not the first time the two parties have discussed potential negotiations to buoy market sentiment, only to see them fall through before they materialize.

Further, Chinese officials have previously stated no trade deal would be made until the 2020 election is concluded in the United States. Therefore, it seems likely the meeting is an attempt to delay further escalation – more so than a shift in strategy. 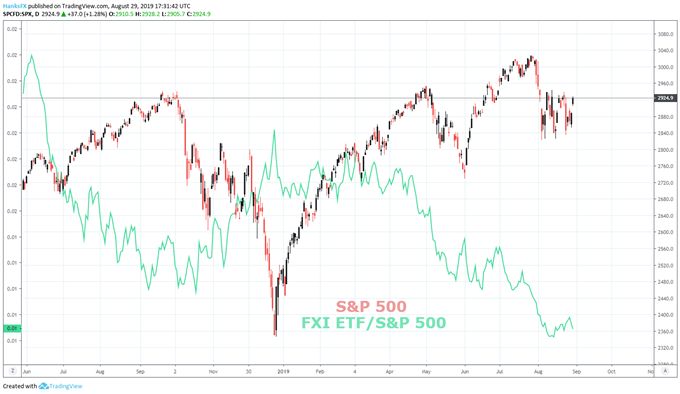 While the S&P 500, Dow Jones and Nasdaq 100 may not reveal such apprehension, the China-tracking FXI ETF might. Despite a gain of more than 1.3% for all major US indices, the FXI ETF registered just a 0.8% increase with the divergent performances sending the FXI/SPX ratio even lower. With many economists and investors suspecting the trade war has been more harmful to China than the US, one could expect FXI to outpace its American counterparts – especially given its higher beta – in the event of a cooldown in the trade war.

That said, looking to the track record of recent negotiations and the lack of exuberance in FXI, it would be rather unsurprising if the forthcoming negotiations broke down or yielded little tangible fruit. Further, the S&P 500 must still negotiate resistance that has worked to cap prices throughout August. 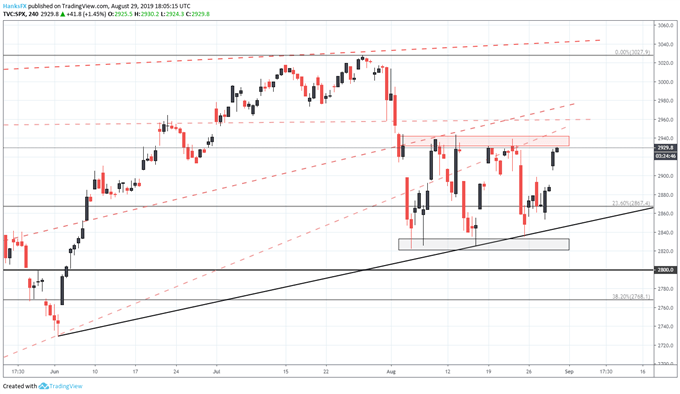 The resistance in question resides at 2,940 approximately and may enjoy assistance from an ascending trendline - that previously served as support – from December. Together, the two levels will look to rebuke the rally higher, while a serious gap to the downside now looms. Given the Labor Day Holiday and the heightened risk it brings, holding positions over the weekend will be exceedingly risky. The combination of resistance and holiday hours could work to undermine a continuation higher as traders look to position for the abnormal conditions. In the meantime, follow @PeterHanksFX on Twitter for fundamental updates and technical analysis.