The US Dollar could be at risk in light of upcoming economic data releases slated for Thursday’s trading session. EURUSD implied volatility is subdued ahead of Thursday’s high-impact event risk listed on the DailyFX Economic Calendar, but the world’s most liquid currency pair has potential to react sharply to Euro-area economic data early on.

Germany – the EU’s largest economy – is already on the brink of falling into a recession and upcoming datapoints on inflation and the labor market that fail to inspire confidence stand to weigh in on the market’s expectations for the ECB to provide an aggressive stimulus package. 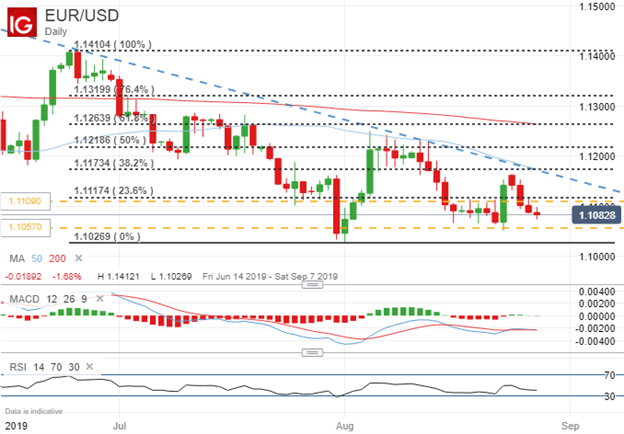 That is not to say that spot EURUSD will lack a response to updated Q2 US GDP data or the release of the latest US Advance Goods Trade Balance figures. Q2 US GDP data is expected to be revised downward by 0.1% from the initial 2.1% annualized reading according to Bloomberg’s median estimate. Aside from the headline gross domestic product figure, market participants will likely scrutinize the sub-components for signs of relative strength or weakness across America’s economy. Attention could be focused on the positive contributions to Q2 US GDP growth including personal consumption expenditures and government outlays which were partly offset by falling net exports, inventories, and fixed investment. 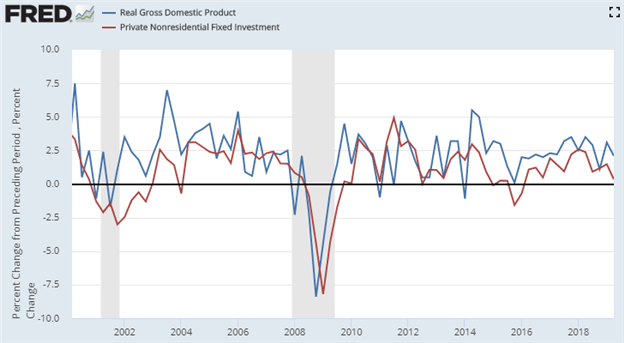 Furthermore, a sharper than previously reported decline in fixed investment – likely owing to ongoing uncertainty surrounding the US-China trade war – could pressure the US Dollar as it has potential to accelerate the market’s expectations for the Federal Reserve to cut interest rates.Also, the outstanding risk posed by a potential tweet from US President Trump in reaction to the closely watched economic data could sink the US Dollar as well. 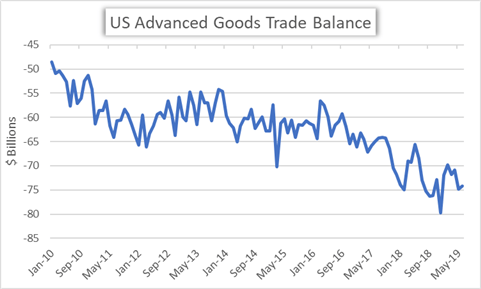 July’s advance goods trade balance data could also serve as a catalyst that motivates Trump to bash the Federal Reserve and strong US Dollar. Although the US trade deficit improved slightly in June, the monthly figure still stands at roughly -$74 billion and is notably lower than when President Trump took office in 2017. As such, the US Dollar could be dragged lower if signs of a growing deficit and/or lower exports are revealed in tomorrow’s advance goods trade balance report. This is because it will likely increase the market’s Fed rate cut bets while also encouraging President Trump to reaccelerate the US-China trade war. 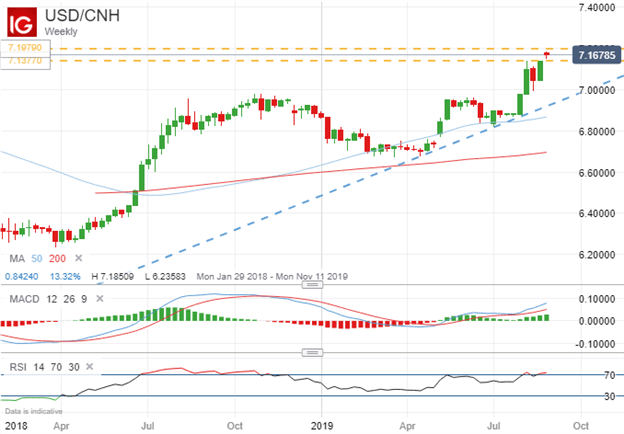 That said, spot USDCNH may provide the cleanest depiction of downside risk faced by the greenback relative to other major US Dollar currency pairs. We previously brought to light how the Chinese Yuan could serve as a US-China trade war barometer with gains in spot USDCNH indicating tensions remain elevated and may even escalate further. While this may initially spark safe haven demand and send forex traders flocking to the US Dollar, price action could get strong-armed lower as the market reassess the likelihood of further Fed rate cuts.