Asia Pacific stocks were mostly higher, if only modestly so, on Wednesday, with the markets perhaps showing a degree of resilience to various bad-news stories both global and regional.

Tottering trade relations between China and the US still loom large over all trade, of course, but Japan and South Korea’s long diplomatic feud appears to have intensified too. Tokyo will take its East Asian rival off its list of preferred trading partners on Wednesday, a move which can hardly fail to incite retaliation.

Bond markets were also in uncomfortable focus. The US yield spread between two- and ten-year benchmark paper fell to -5 basis points on Tuesday, its lowest level since 2007. This inversion has historically been a pretty good recession indicator, although it is not infallible.

Given all that, it might be hard to see why so many Asian markets managed to hold up. There was some more hopeful news out of China late Tuesday. Beijing launched a series of measures aimed at boosting domestic consumption. A government-backed Chinese think tank said that overall debt stabilization in China could also leave room for more fiscal stimulus measures. China’s debt-to-GDP ratio has risen to nearly 250% nonetheless in the first six months of this year.

None of the above did much for Chinese stocks in any case. The Shanghai Composite was a notable loser, down 0.3% as its afternoon session got under way. In troubled Hong Kong the battered Hang Seng did better, gaining 0.1%. The Nikkei 225 was up 0.2% and the ASX 200 gained 0.4%. South Korea’s Kospi rose 0.6% despite the worsening of relations with Japan. Wire reports suggested that investors were prepared to look for possible bargains among oversold stocks to take advantage of changes in the important MSCI (Morgan Stanley Capital International) index weightings which are widely used as allocation benchmarks.

The foreign exchange market was a little less exciting. The US Dollar came under some early pressure thanks to those wilting Treasury yields, however USDJPY crept back up again as the Asian session went on. The region’s two major commodity currencies, the Australian and New Zealand Dollars, continue to face pressure on two front: general, trade related risk aversion and a complete lack of domestic policy support.

AUDUSD appears to have faded once again at the downtrend line in place since the start of August. A failure to rise above this will keep investor focus on this month’s 11-year low but of course this new downtrend is merely a continuation of the currency’s weakness within the downtrend channel which has endured since late 2018. 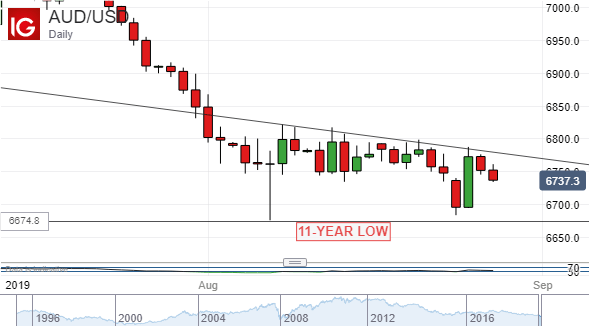