The US Dollar may extend gains vs TWD if Taiwan’s unemployment rate comes in higher than the 3.72 percent forecast. USDTWD strength may also be amplified if commentary from officials at the Jackson Hole symposium stoke risk aversion and boosts demand for liquidity. In this environment, the USD’s unparalleled liquidity and position as the world’s reserve currency gives it a stark advantage relative to its peers.

Since November 2018, the unemployment rate in Taiwan has continued to climb from approximately 3.69 to its most recent print at 3.74 percent. The median estimate has unemployment coming in at 3.72 percent. The export-oriented economy has been under pressure as US-China trade relations continue to undermine global demand and slow cross-border investment in Asia.

As a way to mitigate the impact of slower Chinese growth on the Taiwanese economy, President Tsai Ing-Wen has been making progress in expanding trade into South and South East Asia. However, escalating trade tensions between Japan and South Korea could be another headwind for regional markets against the backdrop of a slowing global economy.

US-China relations are also being strained amid concerns that China may sanction any company involved in the $8 billion sale of US 66 F-16V fighter jets. Escalation of tensions over this particular dispute could spill over into trade negotiations between Beijing and Washington. To stay up-to-date on critical geopolitical updates, you may follow me on Twitter @ZabelinDimitri.

Looking ahead, USDTWD traders will be cautiously watching for key comments at the upcoming G7 summit in Biarritz, France. The main topics of discussions will be the Sino-US trade war and escalating tensions between Tehran and Washington. Brexit will also make its way on the docket as the UK edges closer to the October 31 deadline where the outcome could have a significant impact on global financial market stability. 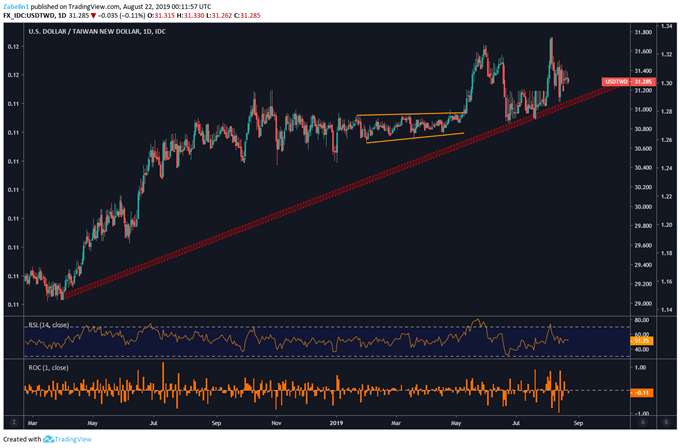