Asia Pacific stocks were mostly lower on Thursday as Japanese data disappointed and investors continued to worry that the US Federal Reserve might not be as disposed to monetary easing as many would like.

Australia’s ASX 200 was the only major market to buck the day’s losing trend. It had added 0.4% as its close lose buoyed up by crowd-pleasing results from Pro Medicus and the Coles Group. Elsewhere cheer was much harder to find.

Japanese equity struggled with news that the domestic manufacturing sector’s output had contracted for a fourth straight month in August. The Jibun Bank flash Purchasing Managers Index came in once again below the crucial 50 mark which separates expansion from contraction. It was 49.5, just a tick above July’s print.

The Nikkei 225 had been in the green, but it slipped back after the data to loiter around its opening level by the middle of the afternoon. Japan’s big manufacturers were resilient to the data but major electronics exporters like Sony sold off. The Shanghai Composite lost 0.2% while the Hang Seng shed 0.9%.

The minutes of the Federal Reserve’s last monetary policy meeting painted a rather balanced monetary picture. Rate-setters voted to cut borrowing costs on that occasion but agreed that the move should not be viewed as an indication that there was a ‘pre-set course’ for more reductions. However, they also fretted that a drawn-out trade confrontation between China and the US could threaten growth.

The US Dollar was supported, if modestly, perhaps by the Fed’s apparent caution over future rate cuts but also, probably, by general market torpor before this week’s central bankers’ Jackson Hole get-together. That starts on Thursday and runs on into the weekend. It initially ticked lower against the anti-risk Japanese Yen only to recover some composure later.

The New Zealand Dollar was very close to a new, three-year low against its US counterpart as investors remain pretty certain that its central bank, at least, remains in dovish frame of mind after this month’s shock, half-percentage-point rate cut. 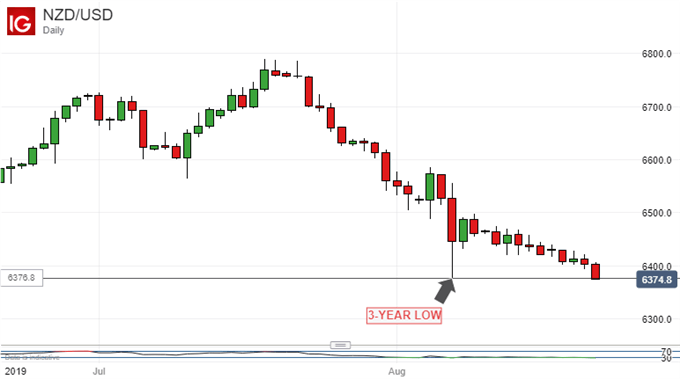 August 7’s intraday low point of 0.6377 looks like being broken on an intraday basis Thursday/