The meeting between UK PM Boris Johnson and German Chancellor Angela Merkel on Wednesday produced some interesting comments which, if followed through on, could produce an answer to the current Brexit deadlock. Frau Merkel said at yesterday’s press conference that the Irish backstop was only a fallback position designed to come into effect if all other options failed. Merkel then said that a solution to the backstop impasse would probably be found in the next two years, ‘but we can also maybe find it in the next 30 days to come’. While this may be just a throwaway comment, it may also be a prompt to the UK that the EU may be responsive to fresh ideas in the coming weeks. A slightly more conciliatory tone from Germany ahead of PM Johnson’s trip to France today to see President Macron. Macron continues to take a hard line with the UK, and it will be interesting to see if he refuses to change his stance or if, like Merkel, he softens his approach.

GBPUSD is currently either side of 1.2130 and is waiting for news from Johnson’s meeting with Macron. Sterling bulls may take comfort from GBPUSD’s recent behaviour to Brexit news flow. On Tuesday this week, GBPUSD jumped around 100 pips almost immediately when news filtered out that Chancellor Merkel was looking forward to her meeting with Boris Johnson to discuss a practical Brexit backstop solution. It may be that Sterling short positions in the market are starting to get edgy and Tuesday’s sharp rally did suggest that near-term stop-loss positions were taken out quickly. 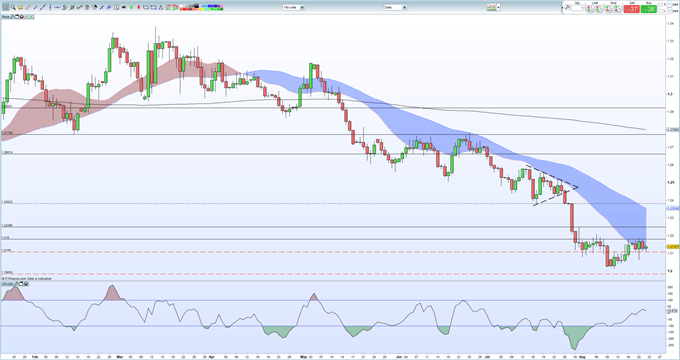 Retail traders are 76.1% net-long GBPUSD according to the latest IG Client Sentiment Data, a bearish contrarian indicator. However recent daily and weekly positional changes give us a stronger bearish contrarian bias even though traders remain net-long.