New to trading? The free DailyFX Guide is for you.

Asia Pacific equity markets endured a mixed and scrappy session Wednesday as investors mulled the snapping of a three-day winning streak on Wall Street and the re-emergence of Italian (and, by extension, eurozone) politics onto a worry list already crowded by US-China trade tensions, Brexit, protest in Hong Kong and more.

Italian Prime Minister Giusseppe Conte has announced his intention to resign. He has been in market focus since one of his deputies, right-winger Matteo Salvini, called for snap elections and a no-confidence vote. The markets are also looking ahead of course to the Jackson Hole symposium of central bankers which starts on Thursday under the auspices of the Kansas City Federal Reserve.

Local equity started broadly lower, perhaps unsurprisingly given all those potential pitfalls. However, while the Nikkei 225 and Australia’s ASX 200 both stayed down, the Shanghai Composite, Hang Seng and Kospi did manage gains, if very modest ones. None was up by more than 0.1% in the middle of their trading afternoon.

Results and updates continue to drive the Aussie benchmark, with McMillian Shakespeare topping ASX gainers and a2 Milk Company and Domino’s Pizza both hit by disappointing reports to the market. The big four local banks were also lower, with financials also struggling in Tokyo. Nissan and Mazda were both down while Toyota managed to pare its losses and get back to the starting line. In Hong Kong smartphone maker Xiaomi took a fall thanks to reduced sales and news of a bigger domestic market share for rival Huawei.

The US Dollar was under a bit of pressure Wednesday as US yields slipped in the Jackson Hole runup. Clearly Fed Chair Jerome Powell is likely to be the star of this particular show with his first words at the symposium due on Thursday. Italian politics don’t seem to have made much dent in the Euro at this point, although the situation will continue to grab market attention at this fragile time.

USDJPY could be topping out again just shy of its previous, mid-August highs, but it would probably be rash to be too certain of this, at least until the markets have heard from all of the impressive Jackson Hole roster. 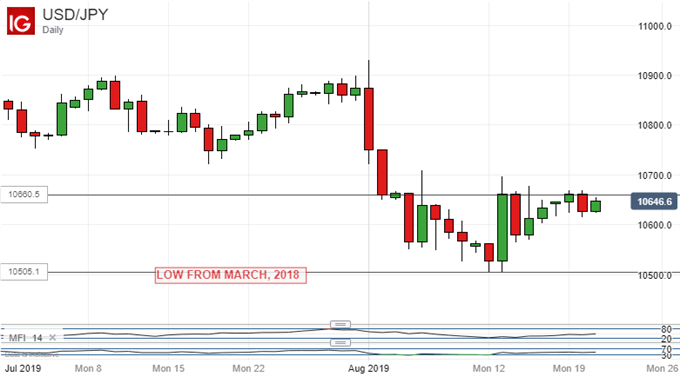