The Canadian Dollar, which was previously crowned as the best performing major currency for 2019, has drifted lower recently as disappointing economic data and depressed crude oil prices weigh on the Loonie. With the release of July Canada inflation slated for 12:30 GMT during Tuesday’s trading session, forex traders will likely be forced to reevaluate Bank of Canada (BOC) rate cut bets if the data warrants a reaction which stands to jolt Canadian Dollar price action. In a stark contrast to most major central banks, the Bank of Canada has left its policy interest rate unchanged despite dovish actions and guidance recently revealed by the Fed among others. That said, a weaker-than-expected reading on the July Canada Inflation report could provide the Bank of Canada with enough ammunition to justify easing monetary policy in the near future. This possibility cannot be discounted considering the close relationship between the Canadian economy and crude oil prices which have been under pressure recently. 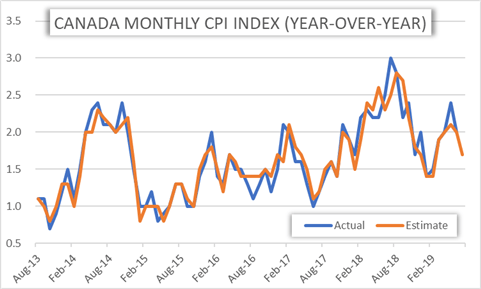 According to the press statement accompanying the July BOC interest rate decision, Canada’s central bank stated that the Governing Council will continue to “monitor incoming data and pay particular attention to developments in the energy sector and impact of trade conflicts on the prospects for Canadian growth and inflation.” As such, the BOC will likely pay close attention to Wednesday’s release of the July Canada CPI report which could weigh into future monetary policy decisions and thus threatens to spark Canadian Dollar price volatility.

USDCAD overnight implied volatility jumped to 6.75% which is nearly a full point higher than its average over the last 12-months. The rise in anticipated Canadian Dollar price action is also reflected in CADJPY overnight implied volatility which climbed to 12.87% and is the highest reading since May 9. Also, AUDCAD could be a particularly volatile currency pair during Wednesday’s trading session in light of Aussie event risk surrounding the release of PMI data which is highlighted on the DailyFX Economic Calendar. 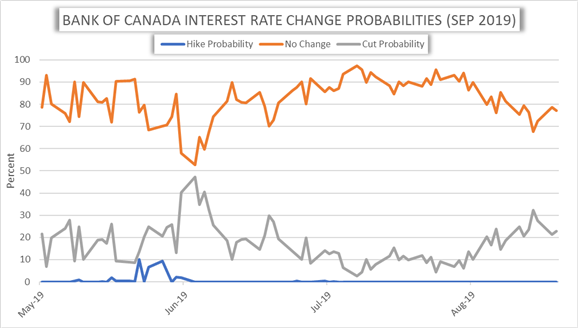 Currently, the Bank of Canada is expected to leave rates unchanged at its next meeting scheduled for September 4 judging by overnight swaps pricing. Although, the odds that the Bank of Canada will hold its policy interest rate at the current 1.75% level has drifted lower from a 94% probability on July 31 down to a 77% today. Looking further out, the probability that the BOC cuts rates before year-end stands at 72%. 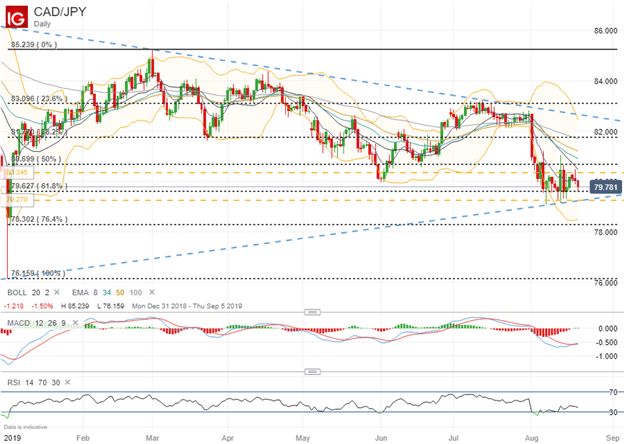 CADJPY has traded sideways so far this month with spot prices staying roughly rangebound between 79.600-80.700 levels, which happens to align with the 61.8% Fibonacci retracement and respective mid-point of the currency pair’s 2019 range. The 8-34-50-100 EMA envelope appears to be exerting downward pressure on spot CADJPY price action whereas the bullish trendline extended from the JPY-flash crash low printed back in January to August’s swing low could help keep CADJPY afloat. 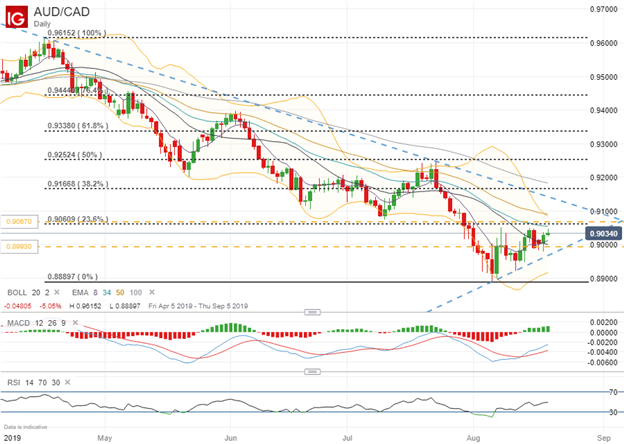 AUDCAD technical picture could provide a more sanguine backdrop for the Canadian Dollar. Aside from the option-implied upper barrier of 0.9067, AUDCAD upside could be limited by technical resistance posed by the 23.6% Fibonacci retracement of the currency pair’s 2019 high and low. Although, AUDCAD bulls might look to continue its short-term uptrend forming from the series of higher lows recorded so far this month.