Find out what retail foreign exchangers make of the Australian Dollar’s chances right now at the DailyFX Sentiment Page.

The Reserve Bank of New Zealand’s surprise half-point hack earlier this month seems to have only bolstered suspicions that more strident policy action could yet be coming on the Australian side of the Tasman Sea.

But there could be a problem with this prognosis, and it lies with the labor market. While the Reserve Bank of Australia is clearly mandated to boost inflation, and inflation remains stubbornly low, it has also placed strong emphasis on the labor market as a monetary signpost.

Well, that labor market has so far refused to roll over. Indeed, it’s powering ahead. Despite Australia’s clear links to the US-China trade war story, and despite that story’s persistent weakening effect on the Australian Dollar, job creation remains very strong.

The latest data, for July, humiliated forecasters with a rise of 41,000 overall jobs. The market had been expecting a rise of 14,000. Crucial full-time job growth was nicely perky too. If things continue like this, the RBA will have to publicly row back on the criticality of the labor market in its thinking, if it’s going to get logically to a place from which it will make the cuts which markets expect. If it doesn’t the markets may have to change their view.

Time To Listen Very Carefully to the RBA

Aussie-watchers must now parse RBA comments with special care. Watch for any statements which appear to downplay the labor market from here. They could be a sign that the RBA wants to communicate that it’s still disposed to take rates much lower. Also watch out for commentary in which international woes are emphasized at the expense of the domestic economy. This could be a similar signal.

The latest set of RBA minutes largely passed markets by, but they trod an interesting balance line between domestic and offshore worries. Investors might be well advised to see how long that balance endures. The Australian Dollar clearly wants for domestic interest rate support, but it might not be so utterly short of it at the markets think if job creation remains in top gear. 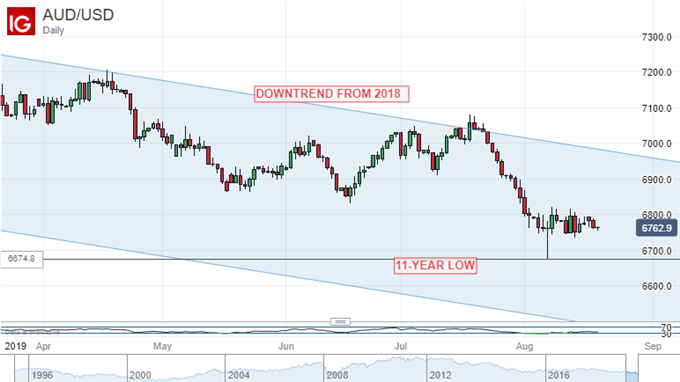