The Norwegian Krone may be in for a painful session ahead if the Norges Bank cools rate hike expectations for the rest of the year. Up until recently, it was one of the most hawkish central banks in the developed world. However, slower global growth and weakening demand out of Europe may be eroding confidence that the Norwegian economy can withstand an environment of tightened credit conditions.

As Norway’s largest trading partner – and destination for over eighty percent of the country’s exports – European demand is critical to the wealth of the Norwegian economy. Policymakers in Oslo are growing hot under the collar as a German ZEW survey data reached alarming-low levels and preliminary reports showed Europe’s largest economy likely contracted in the second quarter.

Norway’s petroleum-based economy is inherently at the mercy of changes in global sentiment due to its strong link to crude oil prices that are fickle by nature. The Norwegian Krone and benchmark OBX equity index frequently move in tandem with Brent, which might explain why the central bank is reconsidering its tightening cycle. Weaker crude oil prices are a downside risk for inflation and may warrant a change in policy. 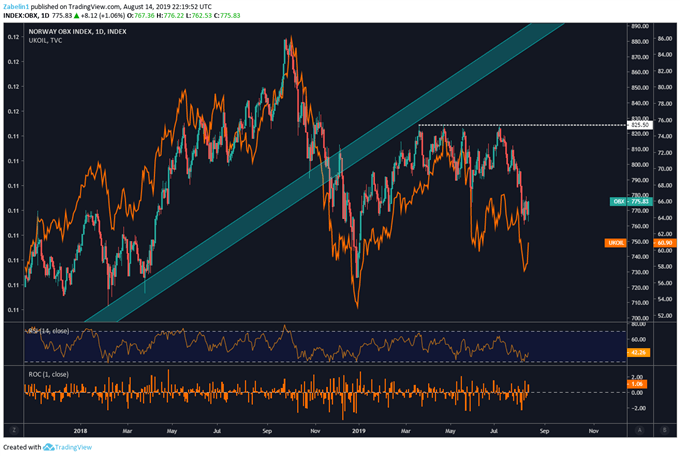 Looking at market implied policy rates on August 14 versus the historical reading in July shows a downward shift across all the various tenors. This suggests investors are anticipating significant trouble ahead to such a degree that it will warrant a reversal of the Norges Bank’s tightening cycle. It appears that the central bank is now finally succumbing to the pressure of its peers, and NOK will likely suffer as a result.