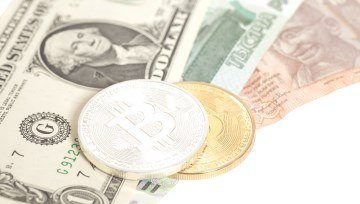 Bitcoin pierced $10,000 for the first time in two weeks as bullish bets unwind and a key fundamental tailwind weakens. As previously mentioned, Bitcoin has enjoyed a boost from weakened emerging market currencies like USDCNH and the Argentine Peso. Now that the US-China trade war has leveled off, and EM FX has regained its footing, technical levels look to be the sole factor keeping Bitcoin prices afloat. 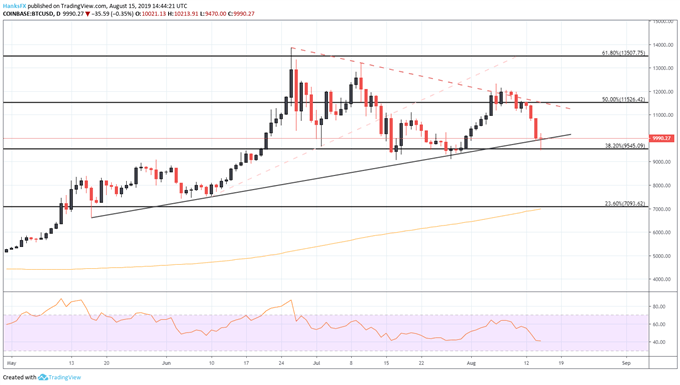 To that end, a key technical level is under fire Thursday as bears look to pressure the digital asset beneath its rising trend from May. The line has helped to buoy BTC throughout July and August. Falling under considerable pressure, BTC bulls looked to a subsequent zone of support at the 38.2% Fibonacci retracement around $9,545 for assistance. Together, the two levels have stalled further declines at present, but continued tests may spur a break beneath which would likely open the door for a more concerted move lower.

An extended move lower could see Bitcoin’s price fall as low as $7,100 near the 23.6% Fib level which shares convenient proximity to the coin’s 200-day moving average. While Bitcoin’s decline has been abrupt, RSI on the daily chart has not yet dipped into oversold territory which could allow for further losses. 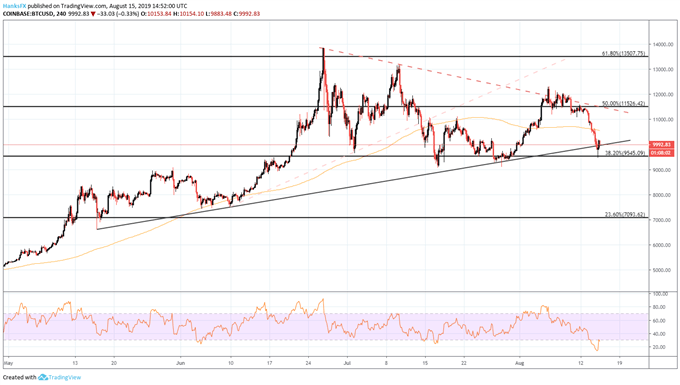 While Bitcoin wades in oversold territory on the 4-hour chart, it also resides beneath the 200-day moving average which will look to resist a rebound higher. As the cryptocurrency runs out of room within the rising wedge, a break below seems most likely at this point – compounded by the fact that a confluence of support has been required to keep price afloat.

As I mentioned on Tuesday, BTCUSD may continue to fall further unless there is another escalation in the US-China trade war, or another exceedingly weak emerging market currency. Nevertheless, the declines pale in comparison to the coin’s return in the year-to-date which is a whopping 172%. As Bitcoin threatens a breakdown, follow @PeterHanksFX on Twitter for fundamental and technical analysis.