AUDUSD PRICE AT RISK AHEAD OF JULY AUSTRALIA JOBS REPORT

The Australian Dollar could be at risk of further downside despite surging earlier this week on the back of US-China trade war de-escalation. AUDUSD, AUDJPY & other Aussie currency pairs will likely take cue on their next direction from the release of Australia jobs data slated to cross the wires during Thursday’s trading session at 1:30 GMT. 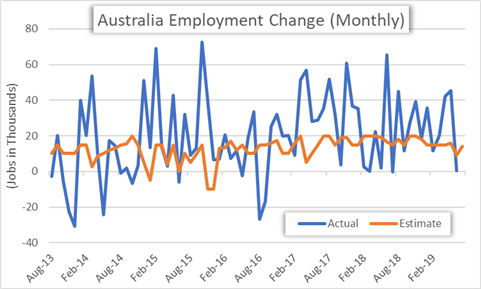 The monthly employment change is a closely watched economic indicator by the Reserve Bank of Australia (RBA) and the excess slack in Australia’s labor market remains a concern of central bankers. Lingering US-China trade war uncertainty has weighed negatively on global GDP growth and economic activity with Australia being indirectly impacted in particular seeing that China is the country’s largest trading partner.

That said, another uninspiring data point on Australia’s monthly employment change could encourage the RBA to loosen monetary policy further with another interest rate cut – especially considering that RBA Assistant Governor Christopher Kent recently stated how cutting rates is an effective tool in lifting the economy. 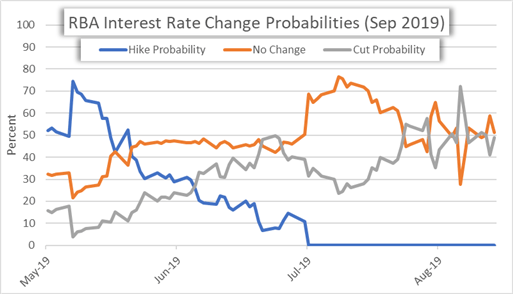 According to the latest overnight swaps pricing, rate traders are chalking up the September RBA meeting interest rate decision to a near 50-50 split between another rate cut and the central bank holding its policy interest rate at the current 1.00% level.

Due to the high-impact nature of the monthly Australia jobs report and current market pricing of anticipated RBA interest rate cuts, it is unsurprising that AUDUSD overnight implied volatility surged to 13.21% - its highest reading since May 6. Sentiment-geared AUDJPY is also expected to be volatile during Thursday’s trading session with an overnight implied volatility reading of 16.51% and is its highest reading since May 9. 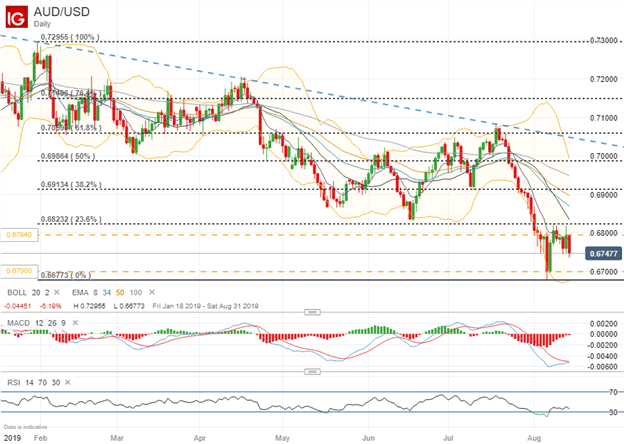 Judging by AUDUSD overnight implied volatility of 13.21%, spot prices are expected to trade between 0.6700-0.6794 with a 68% statistical probability on Thursday. Spot AUDUSD has so far failed to recover the 0.6800 handle since plunging below this major area of technical confluence earlier this month. A better-than-expected Australia jobs report could bolster spot AUDUSD, but upside could be limited in light of tarnished risk appetite and daunting technical resistance. Looking to the downside, the psychologically-significant 0.6700 handle has potential to provide a degree of buoyancy before AUDUSD bears push for a retest of the currency pair’s year-to-date low of 0.6677.