Equity markets have been fading yesterday’s trade tariff delay bounce as weak manufacturing data from China, alongside the US 2s10s treasury curve inverting for the first time since 2007 weighs on risk sentiment. Consequently, safe-havens (JPY, CHF, Gold) are once again in demand, while high beta currencies are softer.

AUD: The notable underperformer is the Australian Dollar, largely on the back of the weak Chinese data, while the US curve inversions provides yet another reminder that the global economy is slowing down. As such, this has offset the slightly better than expected Q2 wage data and in turn emphasises that the external environment is dictating price action.

GBP: Higher than expected inflation data, in which the headline rate rose to 2.1%, above the BoE’s 2% target, did little to shake off the negative sentiment surrounding the Pound with the outlook predominantly determined by Brexit. In turn, GBPUSD failed to break above the 1.2100 handle with the higher inflation figures unlikely to alter the outlook for BoE monetary policy.

EUR: Tight range trading persists for the Euro with the currency continuing to trade within close proximity to the 1.1200 handle. German Q2 GDP figures showed a contraction of 0.1%, however, while this was in-line with expectations, it does raise the question as to whether Germany will turn on the fiscal taps with a German recession appearing more likely. While German 10yr yields may be at fresh record lows, the spread against the US 10yr treasury continues to move within a Euro supportive manner thus stemming further losses for the Euro.

Crude Oil: Brent crude futures have once again broken below $60, shedding as much as 3% at one point. Risk off sentiment has been the dominant theme throughout the session, while yesterday’s API crude oil inventory added to the weakness, whereby the latest data showed a surprise build of 3.4mln barrels (Exp. 2.7mln barrel drawdown in stockpiles). 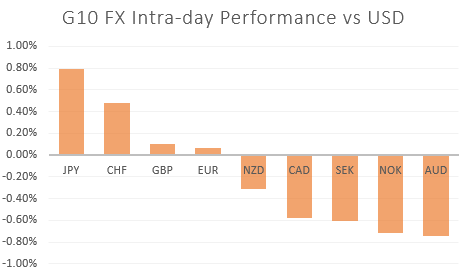